WATERFORD’S North Quays regeneration project looks set to be a “priority for investment” when the Government unveils its National Development Plan this week.
Details of the eagerly anticipated plan which will see an investment of €115 billion in the country’s infrastructure over the next 10 years will be announced on Friday after a special Cabinet meeting being held in Sligo. 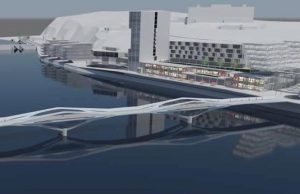 The North Quay project will be green-lit by Government funding, which is set to be announced this Friday.

Government funding in excess of €60 million is being sought for the Waterford North Quays project.
Senator Paudie Coffey (FG) says the government will prioritise the project – paving the way for one of the most significant developments in the history of Waterford City.
He has confirmed that Finance Minister Paschal Donohoe has indicated that the landmark project will be included as “a priority for investment”.
Senator Coffey also revealed that Minister Donohoe has agreed to visit Waterford to meet with the key stakeholders involved in the project, representing “a massive endorsement for the North Quays re-development project”.
“This meeting will be a significant engagement to plan the delivery of the funding stream for the project to make it happen,” he said.
“The North Quays development will herald a bright new era in Waterford’s history and will mark the beginning of a new period of growth and prosperity in the city and county, and the entire region. Waterford City has been identified as one of Ireland’s regional cities that is ripe for investment and the Government wants to see the city double in population over the next 20 years. It is by building scale and capacity with projects such as the North Quays that the city will reach its full potential and take its rightful place at the top tier of large urban centres in the South-East.”