Relief as Kenneally sentence is upheld

Relief was the overwhelming emotion expressed by the survivors of convicted paedophile Bill Kenneally after the Court of Appeal upheld the 14-year prison sentence imposed on the former sports coach for abusing 10 teenage boys during the 1980s.
Speaking in the wake of last Thursday’s verdict by the three-judge panel, Colin Power said that Kenneally’s appeal had “been like a rucksack on all of our backs…of course there was a fear there before the verdict was known. But once the verdict was read out in court, there was a lot of satisfaction as well in terms of the sentence that was handed down two years ago being upheld. I think Judge Eugene O’Kelly deserves a great deal of credit given how thorough he was when it came to the sentencing, which was something the judged mentioned on Thursday, they described it as a model in terms of sentencing when it came to such offences.”
While acknowledging that the 14 years and two months handed down to Kenneally by Judge O’Kelly in February 2016 was “perhaps at the very outer limit in terms of severity,” the Court of Appeal ruled that such sentencing didn’t fall outside the range available to him.
Counsel for Bill Kenneally argued that the sentencing had been “grossly excessive” when it came to Judge O’Kelly’s imposing 10 consecutive 17-month sentences for offences Kenneally was found guilty of committing during the 1970s and 80s (a sentence for each victim).
Under the laws which relate to the period in which the offences were committed against each of the 10 victims, the lengthiest individual sentence Judge O’Kelly could have imposed stood at two years (i.e. a maximum of 20 years). Kenneally’s initial guilty plea was also taken into account by Judge O’Kelly when delivering his sentencing.
However, Mr Justice George Birmingham stated: “We have concluded that the sentence arrived at, while severe, and indeed while certainly at the upper end of the available range, was not so severe as to constitute an error in principle,” he said. 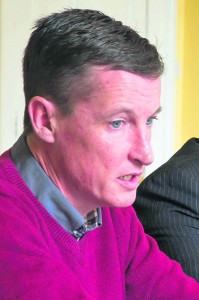 Colin Power continued: “But this verdict isn’t just for us, the victims who have been out in the public about what happened to us. This is for all the other victims of Bill Kenneally who haven’t come forward, and for totally understandable reasons – and we’ve been in contact with a few of them – and for our families and the families of those who’ve not been in a position to come forward the way that we have and for the friends of all the victims, justice has been done. And we’re all very glad that he (Kenneally) will not be on the streets of Waterford for the foreseeable future…so we are very grateful to Judge Eugene O’Kelly for the level of thought he put into his sentencing, and we’re equally grateful to the three judges who clearly put a great deal of thought into their verdict as well. We’re happy and relieved, to be fair.”
Colin Power told The Munster Express that he had been physically sick in the hour before travelling with fellow victim Jason Clancy to court on Thursday last.
“I was full of anxiety and stress about it all. I didn’t know what way it was going to go. Jason is a lot calmer than me when it comes to this, but I’ve never had what you’d describe as a normal day any day I’ve gone into court, even as a victim.”
Interestingly, Colin said that sharing a space with the man who had abused him was not a source of that anxiety. “That actually doesn’t bother me anymore,” he added.
“I think we got over that in February 2016. It was really down to the worry that he might have had something shaved off his sentence, to be honest, but thankfully that didn’t come to pass.”
Repeating his call for the Commission of Inquiry into the Bill Kenneally case to be convened as soon as possible (“I’m cynical enough about when it’s going to start”), Colin Power said the “systematic failures” of a range of public bodies to potentially curtail Kenneally’s abuse had to put on the public record.
“I can tell you now: there’s an awful lot of people in Waterford who knew what was going on at the time. It’s frightening. We know when some people we’re told about this. We know who told them and still they did nothing. This inquiry was always important but it’s actually a lot more important to us now given all of the new information we’ve received and we’ll leave no stone unturned to get it up and running.”