Renewed plea for information on Imelda

As the anniversary of her disappearance nears, Gerry Keenan has reiterated his appeal for information about his missing sister Imelda. Imelda Keenan (22) was last seen as she left her William Street residence on January 3rd, 1994. January 2019 marked 25 years since Imelda’s disappearance and now, entering the 26th year, her heartbroken brother Gerry says there are still no answers. 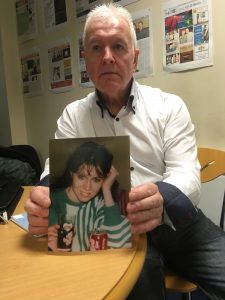 Gerry Keenan pictured holding a picture of his sister Imelda.

He believes there are some people in Waterford who may be “holding back vital information”.
“I always thought in the first six months, and the first year, that we’d get some sort of breakthrough. Then, more people went missing so Imelda’s profile wasn’t as high,” he said.
He also believes his family were “misled” with information in the initial period after Imelda’s disappearance through regular phone calls to the family home in County Laois.
“People would say they saw Imelda on a bus to Cork or a train to Dublin. Everything was referred to the Gardaí in Waterford,” he explained.
Gerry says the fallout from Imelda’s disappearance had a ripple effect through his family and took a huge toll on his own health.His mother and two brothers have subsequently died – without knowing what happened to their beloved Imelda. Gerry says Christmas is the most difficult time of the year. “Christmas always brings it back as her anniversary nears,” he said.
“There has been an empty seat for the last 26 years. The pain continues. It doesn’t get any easier.” Gerry attended the National Missing Person’s Day event held at Dublin’s King’s Inns earlier this month and is a regular speaker at such events.
He says he is keen to keep Imelda’s memory alive. “I will keep on publicising her disappearance until I have no breath left in my body. There is someone out there that knows someone.”
Anyone with any information can contact Waterford Garda Station on (051) 305 300