A resident at Ballybeg’s Ardmore Park has spoken of her ongoing upset in the wake of a spate of attacks on her home, which has seen her lose the use of two different cars in recent months.
Speaking to The Munster Express on Friday last, Favour Ajah, a graduate of General Nursing and Intellectual Disability Nursing at WIT and also a mother of four (aged four to 14), feels that the repeated encroachments on her property are racially motivated.
“I cannot think of why else all of this has happened,” she said. “I do not want to spend any time thinking that anyone would want to harm me or my children because of the colour of my skin, but I cannot think of any other reason for someone doing this.” 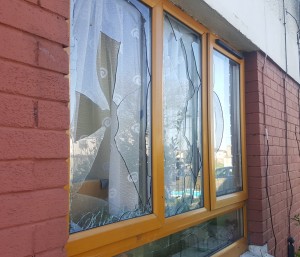 Ms Ajah added: “I am a hard worker. I have lived in this country for 10 years, in this house since 2008. I am not on social welfare and my four children all have Irish passports. I have had my front gate stolen, my car was broken into and then set on fire in January; the replacement car I got then had its windows and wing mirrors smashed in, meaning I had to get it towed away. And the car I have out the front at the moment is just a replacement that I am hiring for a short time. I cannot stay here tonight (last Friday). If I did, I am pretty sure the car would be damaged again. We will have to stay at a friend’s house tonight.”
Ms Ajah added: “I have also had my bins stolen, all of the front windows in the house have been broken – we have had rain falling in our sitting room because of this – and in February, my back door and the windows in the door were kicked in and broken during a robbery – I did get back the few things that were stolen – car keys and so on – they also tried to steal my fridge but then they gave up on that – I just want all of this to stop for the sake of my children and for my own sake too. I am exhausted by all of this. I want all of this to stop so that my family can live their lives in peace.”
Ms Ajah said her frustration and upset is compounded by the fact, as she put it, that she knows who is responsible for these attacks.
“I know who has done this. I know these people by name – and they are young, they are underage. There has been an arrest about the robbery when my back door was broken in (on December 2nd) and I know that the Guards are still looking into some of the other incidents, but I’m so frustrated about all of this. This has been going on for a long time. I’ve been robbed, I’ve been called racist names, I’ve had eggs thrown at my windows long before they broke the windows. I’ve reported all of these things to the Guards – I write down everything that happens – but nothing has been done well enough to stop these people acting like this. It is almost on a daily basis now. It is very difficult to live like this.”
She added: “The Council has told me that they cannot do anything for me when it comes to repairing my windows and my back door – they told me that they will replace the front gate. The Women’s Refuge does not have any room for me and my children – that is how desperate I have become because of all the terrible things we have had to live with. I have a lot of good neighbours, I like living in Waterford and if I could move into another house, if I could buy my own house, I would be gone from here in an instant. But I am not in a position to that at the moment. I wish I could but that is not an option for me at this moment. Bad things happen when I am at home, bad things happen here when I’m not at home. All I can think is that the people doing this, causing so much upset, are very evil people. These people have parents, they have people they are responsible to. But nobody seems to tell these people that it is not okay to do these things. It is not okay to light fires in someone else’s garden, that it is not okay to set somebody else’s car on fire. This abuse, the burglaries, the name calling, the burning, this has been going on for a long time, and it is so unfair. I don’t feel enough has been done to stop this from happening.”
Sinn Féin Councillor John Hearne, who is familiar with Ms Ajah’s predicament, feels City Hall ought to evict any Council tenant proven to be culpable of offences as identified by Favour.
“The rule of law applies to everyone. If and when a Council can take action against any tenant who is proven to have broken the law having acted in a criminal or anti-social manner, then the ultimate sanction should apply,” he said. “They should have their keys taken off them.”
Cllr Hearne added: “If there was a ‘three strikes and you’re out’ policy in place, I reckon that’d put a stop to a lot of the problems which law-abiding tenants are having to put up with. And if someone paying rent to the Council for a house or a flat has three strikes on their name, then I think they should be turfed out.”
Cllr Hearne added: “Decent people don’t deserve to live with this constant threat hanging over them. And of course if we had Community Guards re-instated in the numbers they should be at, there’d be a lot less of this sort of carry-on.”