PLANNING permission is being sought for major expansion plans at Waterford Airport.An application for planning permission for the development has been lodged with Waterford City & County Council by Waterford Regional Airport PLC. The development will consist of widening the existing 1,433m long runway from 30m in width to 45m in width and the provision of an additional 470m long x 45m wide extension to this runway at its northern end. These works are in addition to the existing permission for a 45m wide x 350m long extension to the south of the existing runway.
The proposed runway, when developed, would therefore be 2,253m long and 45m wide. 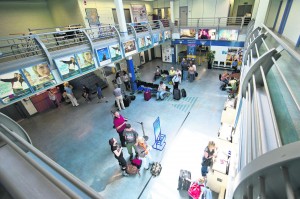 It is also proposed to extend the width of the exiting taxiway connecting the runway to the airport apron. The planning application also includes the construction of a new 205-space car park to the east of the existing car park in front of the terminal building. Chairman of Waterford Airport Dan Browne is due to address local Councillors today (Tuesday) as part of a briefing on the future plans for the airport. Waterford Airport has been without a commercial airline since VLM ceased its services in June 2016.
In the summer of 2017, it was announced that Aer Southeast would operate flights from Waterford to London Luton, Manchester and Birmingham.
However, the Commission for Aviation Regulation (CAR) forced Aer Southeast to stop selling tickets for flights because it did not have the required tour operator’s licence.
Last December, emergency government funding was approved for Waterford Airport as the future of the Killowen facility became increasingly uncertain.
In January, former Airport CEO Desmond O’Flynn announced that he was leaving his role.
Last month, Minister of State John Halligan said he was committed to providing “every support” he could in terms of securing the future of Waterford Airport.
“There is no doubt that a runway extension is crucial if Waterford Airport is to be viable in the long-term and attract commercial jet aircraft,” he said.
Minister Halligan said he welcomed the proposal put forward by the Board of the Airport to the Department of Transport.
“They have worked exceptionally hard to secure these private investors and develop their plan and I will be giving them every support I can to secure Waterford Airport’s future,” he said.