Sixty votes proved the difference between Seamus Ryan retaining and losing his Waterford City South seat in the 2014 Local Election, with Tallow’s John Pratt returned as Labour’s single representative in the merged local authority. Indeed, the 578 first preferences Ryan gained last time around exceeded his 1999 tally of 537 (109 more number ones than John Halligan) when he was first elected to City Hall. Speaking to The Munster Express at WIT’s Cork Road campus on Wednesday last, the former councillor said he spared little time when it came to throwing his hat back into the ring come the 2019 plebiscite. 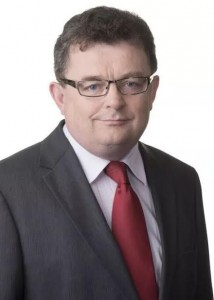 Seamus Ryan has thrown his hat back into the Local Election ring for Labour.

“It was a difficult adjustment (in the wake of losing the seat) but no, I didn’t have to give it too much thought when it came to running again,” he replied.
“We’ve a good, strong, active branch, probably the largest branch in the constituency and we met immediately after the last Local Elections. Of course everyone was disappointed but the key message that came out of that meeting, and I remember it well, was that we had unfinished business. We’d a seat to win back and the campaign to win that seat back began that night, about two weeks after the election. We’ve been working away with that objective in mind, going door to door and organising public meetings, with (Limerick TD) Jan O’Sullivan on the housing issue and with (Wicklow candidate) Jack O’Connor discussing workers’ rights, both of which were well attended. And I have to say this is another key issue for me: I don’t see anyone in Waterford speaking out substantively when it comes to workers’ rights, particularly in terms of zero hours contracts. Nationally, I feel that (Senator) Ged Nash, who is our Spokesperson on Employment and Social Protection has led the debate on this hugely important issue, but I just don’t see anyone in Government or any of our local TDs or Senators speaking out too regularly about this.”
Regarding the next General Election, Councillor John Pratt has been selected as Labour’s candidate, but one wonders will geography prove an bigger obstacle for him at the doors than distinguishing party policy from that of his opponents? “I’ve known John for years, he’s an extremely hard working Councillor and that was reflected in the faith the people in his electoral area showed in him in 2014, when everyone else’s vote was falling, John’s vote (1040 first preferences in Dungarvan Lismore) held, and that was an excellent performance. Will geography go against him? Possibly it will but this is where we as a party have to come in, to try and combat that, by canvassing hard here in the city, in Tramore, Gaultier and on into Kilmacthomas, to get the message out there about John and what he stands for.” And what of Ciara Conway, whose vote collapsed in the last election: what did Mr Ryan make of the flak she copped in the run-up to the last poll?
“I thought she got some unfair criticism, yes,” he replied. “I thought she was an excellent TD who worked very hard for the people of Waterford and she suffered because of the national backlash against Labour.” 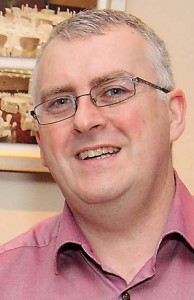 John Pratt will fly the Labour flag in the next General Election. | Photo: Noel Browne

In hindsight, did Seamus Ryan feel some level of relief that Ms Conway, rather than himself, won the 2011 party nomination and Dáil seat given the level of online vitriol she subsequently received?
“Ciara certainly got a lot of that, and I felt it was totally unwarranted. To me, that’s not the way politics should be. We’re all open to discussions and I will sit, debate and argue with anyone on policy issues. But it shouldn’t get personal. Now I’ve had some personal comments posted against me on social media, but I don’t feel that sort of communication does anything to advance a debate. I will sit and debate policy with anyone who is interested in such a debate but a lot of people who criticise politicians on social media are not interested in a two-way communication. And I try not to get into any back and forward online, because there’s no winner there.”
Seamus Ryan feels the sitting City and County Council ought to have done a great deal more in terms of delivering social and affordable housing.
“As far as I’m concerned, they’ve not led on housing. I’ve not heard enough from the Council and, more importantly, not seen enough action when it comes to building houses and easing waiting lists over the past few years. Now this isn’t the first time we’ve had a housing crisis but such problems in the past were solved by the State building local authority and affordable housing. When I was on the Council, I think any estate that was built, 20 per cent, I think it was, went to affordable housing and it worked. But now that seems to be gone, and to me, there’s no-one, that I see anyway, in the current Council shouting loud enough on this issue.” One suspects that one of his potential constituency opponents, Sean Reinhardt (Ind), who gained 59 more first preferences than Seamus Ryan in 2014, would suggest otherwise (along with the other four sitting Councillors) with housing certain to be a major debating issue both before and beyond polling day.
In his closing remarks, Seamus Ryan stated: “I’m not seeing the election as an either/or for the Labour Party in terms of how many seats we win or in terms of increasing our vote share. I do think we will come back with a number of seats on Waterford City & County Council and I’d hope I’ll be able to come back in Waterford City South and win a seat. That’s what we’re working towards. We’ve a good team of people in place who are working on fulfilling that objective with me, but we also have to be looking at re-taking the Dáil seat here in Waterford. Can it be done? Of course it can. There were times before Brian O’Shea won his seat when he was told that he had to build towards winning that seat and he did stick at it, having not been elected after his first couple of elections. He built a base and won the seat for Labour here in Waterford and held it for 12 years. I believe that the people of Waterford have been well served by elected Labour representatives over the years, be it Brian O’Shea, Pat Hayes, Ger Barron – I did 15 years myself as a Councillor – and I am now asking them again on the doors, looking for their support, looking for that number one vote, because I still feel I have a constructive role to play for the people of Waterford City South and beyond. And I’ll continue to devote my energy to retaking a seat between now and next summer’s election.”