South Kilkenny Councillors implore TII to implement ‘necessary’ measures
A year in which more lives were lost on the South East’s national primary roads must lead to urgent and necessary safety enhancements on both the N24 and N25 according to several South Kilkenny Councillors.
Speaking at their final Piltown Municipal District meeting of 2017, Councillors also referenced other non-fatal collisions and countless more ‘close shaves’ on both routes which could just as easily have yielded tragic outcomes.
“These two roads have certainly had a certain level of improvement in the last few years, but they remain very busy routes with fast moving traffic, too fast at times,” said Cllr Pat Dunphy (FG).
“And we still have several right hand turns coming onto and off both roads and there can be no avoiding the potential for ‘serious stuff’ happening as long as that situation remains. I know they probably can’t be avoided in some places but these right turns are far from ideal.” 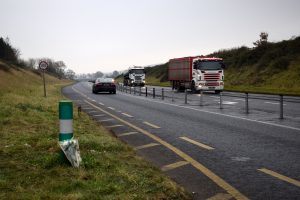 Flowers by the N24 roadside following the death of Denis Walsh on December 1st, 2016.