Following one of the coldest St. Patrick’s Days in Waterford in recent memory, we write this with snow on the ground outside.
Nevertheless the huge army of volunteers turned out to walk on our national day and we must be truly proud of their efforts.
The Waterford Mayor Cllr Pat Nugent and Bishop Alphonsus Cullinan both praised all for their efforts on such a bitterly cold day, with temperatures barely above freezing.
There were 65 entries in total, a rise on the previous year, and with the theme of Vikings the stage was set for something to remember. It lived up to expectations too, thanks to floats of real quality and imagination.
Norwegian Ambassador Mrs Bereit Eikeland was the grand marshal as Waterford reached out to its Viking neighbours. More of this will be found this coming Easter, when we will see the first ever Viking Festival in the city.
Irish dancers opened the event – all clad in black – and were enjoyed by the visiting tourists who braved the elements. Numbers along the quay were down on previous years, but there was a turnout along the Mall.
There was an earlier start time of 1pm to take account of the big rugby game in the afternoon. Tramore saw the parade head off at 3pm as usual. Credit should be paid to the city council and Every Event firm for their coordinating work on the day as well.
There was again a large ethnic entry, adding much to the occasion. The Ukraine and the Filipino community received special commendations while the Indian community also got 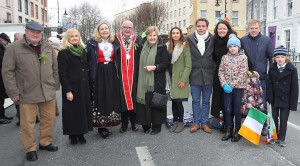 Best Community Walking Entry was the very colourful Ukrainian group, who also did a dance display in their Viking helmets. They had Olga, the Princess of Kiev and her Varangian Guard. The just as colourful Filipinos also had warriors on the walk.
Best Commercial Float went to the Waterford Academy of Music and Arts, while Waterford Youth Arts claimed Best Community Vehicle with Float.
Best Commercial was David Hennessey of the Stage School while Best marching band was the Barrack St. band (who, by the way, have now been entertaining Waterford folk for an incredible 148 years).
The Kangoo dancers also put on a great show in a sporting category. Another surprise was the Red Cross, a voluntary group winner.
It was nice too to see the Fenor master carver, John Hayes get a prize for his strong effort, for Best Community Entry with a Vehicle. He brings skill and creativity to his work, and of course you can see his record breaking sword Dragonslayer on nearby Baileys New Street.
The South East Patient Advocacy Group could also be seen, marching on the cardiac care issue.
Meanwhile, for the first time, all the different scout groups walked together as one group. We met with one man, aged 90 years who has been involved with the De La Salle scouts for nearly all his life, since the age of ten.
His name is Johnny Sharpe, and he lives in Cherrymount. On the day he was accompanied by George Kavanagh of Ferrybank.
Freddie Kervick in Ballybricken supplied many their shamrock including former Mayor, Pat Power.
Before the parade, the traditional mass with the Mayor doing the reading was in the Cathedral at 11.30am to facilitate an earlier parade start. In his address he noted the new Irish contribution to the parade.
This mass was as Gaeilge in the Cathedral but attendance was, it must be said, rather low for the day that was in it.
Bishop Cullinan spoke at how great a day it is for the Irish across the world and how the world wants to be Irish this day.
He recalled the story of Patrick who came to Ireland as a slave in captivity, but would later escape and then bring the Christian faith to Ireland.
The Bishop advised the congregation to google the confessions of Patrick for a good read, noting how we are all sinners. He also recalled well known footballer retired in the UK, Philip Mulryne from Northern Ireland, who has recently become a Dominican priest and friar and was in Waterford last week.
Other clergy at the parade were Bishop William Burrows, Church of Ireland and Sahr Yambasu of the Methodist Church, back from a trip to Sierra Leone, earlier in the year.
It was hard to get an estimate of crowd attendance due to the weather but overall 3,000 people alone walked in the parade itself. Despite the cold all were happy to be there and the atmosphere was a positive one. Well done to all concerned.