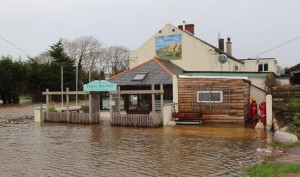 The Three Sisters Restaurant in Woodstown, which was flooded during Storm Frank last Wednesday.

Stock transferred from Woodstown to Ocean Hotel as business keeps running
Phenomenal team work and a ‘can do’ attitude in the wake of Storm Frank kept an East Waterford business open last week – albeit at another venue.
On Wednesday last, floodwaters generated by Storm Frank spilled into the Three Sisters Restaurant at Woodstown’s Saratoga Bar, now being leased by husband and wife team David Deegan and Jacqui Corcoran. 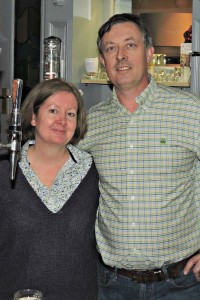 But rather than wave the white flag and concede defeat to Mother Nature/Climate Change – take your pick – David and Jacqui rallied friends, family and neighbours to save the restaurant’s stock and transport it to Dunmore East’s Ocean Hotel, which they also own. In fact, they’d only taken over the Ocean 48 hours previously.
Working around the clock, David and Jacqui opened the Ocean kitchen and served meals to customers who had previously booked for New Year’s Eve dinner at the Saratoga.
“It was obviously an incredibly stressful situation,” said Jacqui. “We are tenants at the Saratoga, where we lease the restaurant and provide food to the bar. We had staff relying on us, and customers who have been loyal supporters since we opened in Woodstown.
“When the waters came into the building we felt helpless. It was just heartbreaking, to see the years of work Bill and Theresa (Doherty) had put into making a fabulous premises being destroyed. We felt we had to do something to improve an awful situation.” 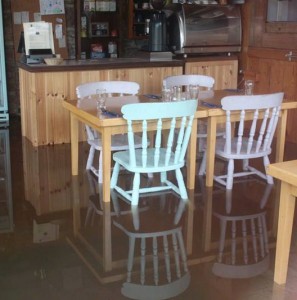 Work is now underway to restore the Saratoga to its former glory, yet it may be up to two months before the bar and restaurant re-opens for business.
Said Bill Doherty: “This has been a huge blow to myself and Theresa. We’ve put our hearts and souls into this place, a huge amount of energy over the past 10 years.
“It’s very, very sad, but we’re trying to stay positive and get on with the job of restoring the bar and restaurant, and reopening as soon as possible with something even better than we had before.”
Bill, Theresa, Jacqui and David, have been “overwhelmed” by the positive support they’ve been receiving, with Jacqui said she found it incredibly touching:
“I’ve been so moved by the help and encouragement we’ve been getting,” she added.
“Our focus now is on trying to survive, keeping our staff employed and getting through the next while until The Three Sisters and the Saratoga are ready to reopen their doors.
“We’re working together with Bill and Theresa to stay positive and stay afloat. And in the meantime we’re dividing our energies between getting the new venture at The Ocean off the ground, and planning into the future for The Three Sisters in Woodstown.”