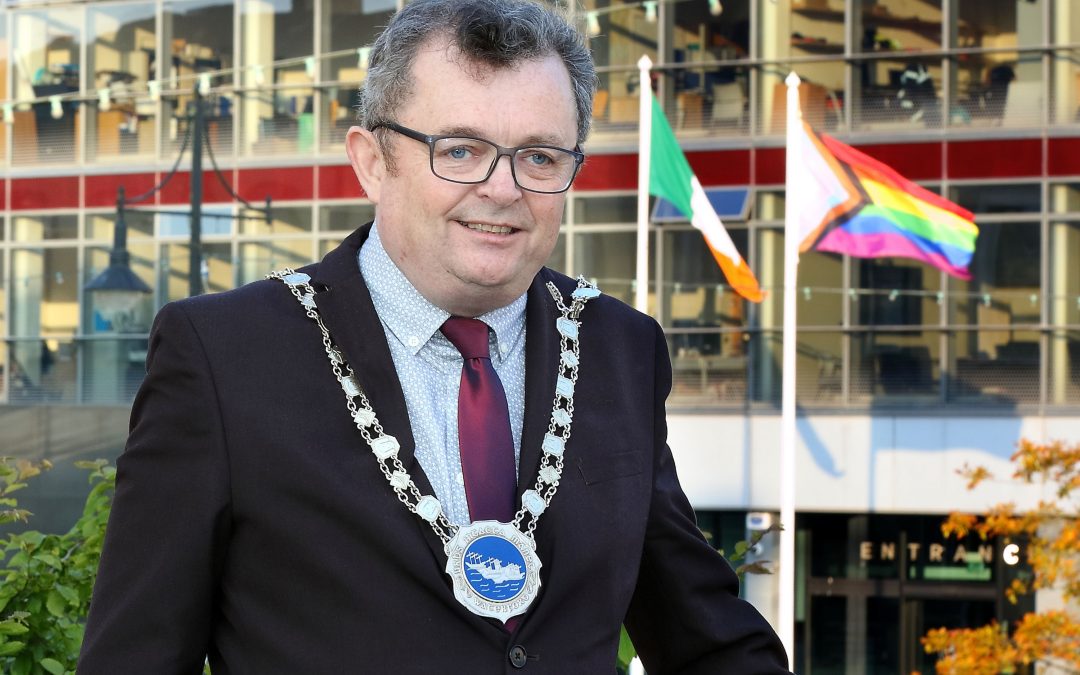 Labour Party Councillor Seamus Ryan has been elected as the Mayor of the Metropolitan District of Waterford for the forthcoming twelve months.
Cllr. Ryan, who previously served as Mayor of Waterford in 2004, will take over from Independent Councillor Davy Daniels, who saw his third term come to an end.
Cllr. Jason Murphy (Fianna Fail) will serve as the Deputy Mayor of the Metropolitan District, having seen off Cllr. Jim Griffin (Sinn Fein) and Cllr. Jody Power (Green Party) in voting for the position.
Cllr. Ryan was elected Mayor unopposed. The nomination of Cllr. Ryan was proposed by Cllr. Jody Power and seconded by Cllr. Susan Gallagher (Green Party). 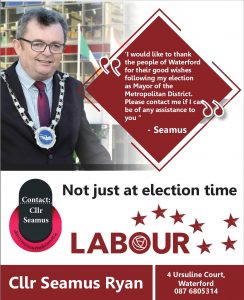 The WIT librarian spoke of his immense pride and delight having been conferred on Monday evening last. He began his speech by thanking the outgoing mayor, Cllr. Daniels and the outgoing Deputy Mayor, Cllr. Mary Roche (Independent) as well as paying tribute to the work of frontline staff in the fight against COVID-19. He spoke of the importance of driving on key projects and supporting those who have been hit hardest by the pandemic.

“As we look forward to the coming year, there is a growing optimism in Waterford as the economy and society start to re-open. Those lucky enough to keep their employment are starting to go back to work. However, I am aware that there are people who are struggling to make ends meet. They are deserving of the support of this Council. This Council is looking forward to making progress with key infrastructural projects in the next year – despite recent setbacks, I am confident that we will see much-needed progress on the North Quays project and we must not lose sight of the Michael Street development, which I believe to be equally important, as it will revitalise the whole city centre.”
“I would like to take this opportunity to thank my wife Deirdre, and our children, Cliodhna, who is in Tanzania, Aibhilin, who is in Uthrecht, and Colm – who is in Ursuline Court, for their ongoing support. I would like to thank my employers Waterford Institute of Technology for their support in my role as a councillor, and I would like to thank the Waterford Labour Party. The support of everyone is really very much appreciated.”

“I’m very honoured to be Deputy Mayor, I’d like to thank my proposer and seconder and those who opposed me – it’s very important to have democracy and competition. I’m really looking forward to the year ahead.”

Cllr. Davy Daniels thanked everyone for their support in his twelve months as mayor – his 47th year as an elected member of Waterford City & County Council, and like Cllr. Ryan – took the opportunity to voice his appreciation of frontline workers. 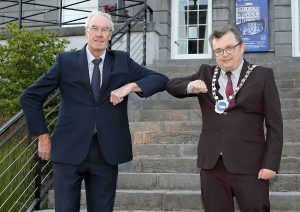 The outgoing Mayor, Cllr. Davy Daniels, wishing the best of luck to his successor, Cllr. Ryan.

“As my term as Mayor comes to an end, I would like to give thanks to those who have made my year in office an enjoyable one. Given the national and global circumstances as a result of COVID-19, this year has been a somewhat difficult experience given that so many events and celebrations were cancelled and postponed. I could only look on with admiration, as our frontline workers bravely put their lives on the line to attend and save the lives of the most vulnerable in society. A special word of thanks must go to those.”

He paid tribute to local businesses who have survived in the face of the pandemic, and commiserated with those who were not able to continue trading. Cllr. Daniels re-iterated the importance of supporting local, with positive times on the horizon for Waterford.

“We must do what we can on an individual and a collective level to help Waterford businesses back on their feet and to sustain them going forward in these uncertain economic circumstances. Still, there is great confidence and belief that further investment will positively serve the development of the region. To my fellow members, I thank you for your co-operation, thank you to my Deputy Mayor, Cllr. Mary Roche (Independent) for always being there – and to thank Council officials and staff for lending a hand and answering queries. I’d like to thank our CEO Michael Walsh. I’d like to thank my family and friends – who I am so blessed with and grateful for. You are appreciated so much, thank you all.”

Well wishes were extended to the incoming Mayors as well as those departing office from all councillors and officials present at the June Metropolitan District meeting of Waterford City & County Council.