Despite the driving rain, the latest Right2Water march went ahead in Waterford city centre on Saturday afternoon last, the irony of a free soaking not lost on a good humoured crowd.
With a local Right2Water spokesperson estimating that at least 1,000 protestors took to the streets on Saturday last, a series of speakers re-iterated the movement’s stance ahead of the looming general election.
Among them, general election candidate David Cullinane claimed that Fine Gael and Labour have “underestimated the level of public anger over this issue”.
“Today’s demonstration is an expression, not just of opposition to domestic water charges but to the Government’s whole austerity agenda. Decision after decision taken by this Government has caused chaos in the lives of working families…
“For the first time in the history of this State, there is a clear and present alternative to the stale politics of Fianna Fáil and Fine Gael,” claimed Senator Cullinane.
“The Right2Change platform is bringing progressive parties and individuals together in a way not previously seen,” he added.
Deputy John Halligan (Ind) was also among those who addressed the protest, stating that the resistance demonstrated across the country on Saturday last was timely given that it “corresponded with the Fine Gael love-in…make no mistake, this issue is alive and kicking on the streets of Waterford and right across the country”.
Fellow general election candidate Una Dunphy (People Before Profit) was enthused by the turnout on Saturday last, stating her hope that the pending general election campaign would see “a vote for a change and the scrapping of this unjust charge”. 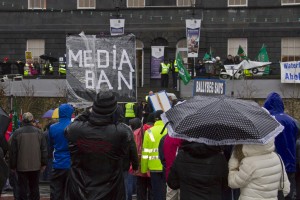 According to Right2Water Coordinator Brendan Ogle: “The last two Irish governments cut funding for our water and sewage services from €839m in 2008 to €289m in 2013 – a cut of 65 percent in five short years. Is it any wonder we had boil water notices in places like Roscommon and Galway. But they now have the cheek to come to us and say the system is underinvested and we need water charges.”