Up to 60 construction workers at the new West Pharma site on the Carrickphierish Road downed tools on Monday morning in a dispute over pay.
The trades workers and labourers, who are employed by various contractors and sub-contractors, say they are taking the unofficial action because they are not receiving the overtime or wet-time rate that they are entitled to under national construction agreements.
“Many of us are working 47 to 49 hours a week but we are only being paid the flat hourly rate,” explained one worker.
“Per month, this equates to about a week’s wages for every month since we started working here.
“We didn’t take the decision to protest lightly. We want to work. But there is a lot of construction work planned for the south east in the coming years and if we don’t put our foot down now, we are fearful of further exploitation down the line. The Government is telling us that the country is being rebuilt but at what cost? A precedent is being set here.”
There are a total of 170 construction workers employed at the West Pharma site, where Sisk’s is the main contractor. A meeting took place between the protesting workers and the Sisk site manager on Monday, when a proposal was made to pay the workers the agreed overtime rate of time and a half. However this was rejected on the basis that it did not include backpay for overtime already worked or wet-time and workers have indicated that the picket outside the plant will continue until agreement is reached on a proper pay structure.
US-based West Pharmaceutical Services, which makes packaging components and ‘drug delivery systems’ for pharmaceutical products, has said it will create 150 jobs when its Waterford operation opens in 2018, with the potential to double these figures in the coming years.
A statement issued to The Munster Express from West Pharma said the company was working with John Sisk & Son Limited to “better understand the claims being made by local unions”. 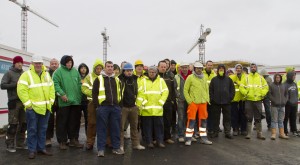