Curtain up for Portlaw Panto

Portlaw Musical Society’s 36th annual pantomime, ‘Hansel and Gretel’ will run at the Premier Hall from this Thursday, February 4th, through to Saturday night at 7pm, with a matinee to be held on Sunday at 3pm.
The pantomime is being produced and choreographed by Damien Walsh who is making his production bow in the Tannery Town. Damien can draw from a vast reservoir of theatrical experience, having performed in Flaggy Lane’s WIFLO-winning ‘Singing In The Rain’, while also treading the ‘Tops of the Town’ boards in 1989, 90, 92, 93 and 94.
A popular DJ, Damien is being assisted in choreography duties by champion dancer Claire O’Hara, who has appeared with the Mulcahy Bible dancing troupe, along with pantomime and musical appearances in both Portlaw and Carrick-on-Suir. 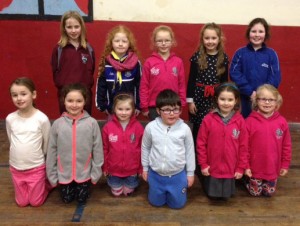 Pictured are the Junior Musical Society members who will be performing on Saturday night's run of 'Hansel and Gretel' at the Premier Hall.

Damien O’Brien is on board for the first time as Musical Director, while Chorus Mistress and rehearsal pianist Claire Cully is also a Portlaw Panto newcomer, with Dylan Bible (guitar) another new arrival.
Alan Conagh on saxophone and Jarlath McKenna on drums are the old reliables returning to the orchestral ‘pit’ this week, and as always, they’ll be sure to add their own slice of fun to the panto run!
Hansel will be played Darren Butler while Niamh Doherty has been cast as Gretel. Jonatham Walsh is donning the dame’s wig as Widow Cranky while the supporting cast also includes Stephanie Maguire (in her 21st consecutive production), Mairead Murphy (in her first principal role), along with Kate Kearney who will play Bluebird.
Also treading the Premier Boards this year are the ever reliable Kieran Laffan and Teddy O’Brien, the returning Christopher Long, Jamie Power, Anne Nolan, David Walsh, Fred Kelly, Maura Prendergast, Noel Mackey and Declan Smith Robinson.
The teenage chorus and children’s chorus, which is drawn from Junior Musical Society will also play their part, as will the dancers put through their paces by Faith Mulcahy Drohan.
Booking is available today (Tuesday) at the Community Centre between 5pm and 7pm with phone booking only available on 086-0519210 from Wednesday, February 3rd between 3 and 5.30 pm. Tickets are priced at €12 for adults and €8 for children. Break a leg, one and all!