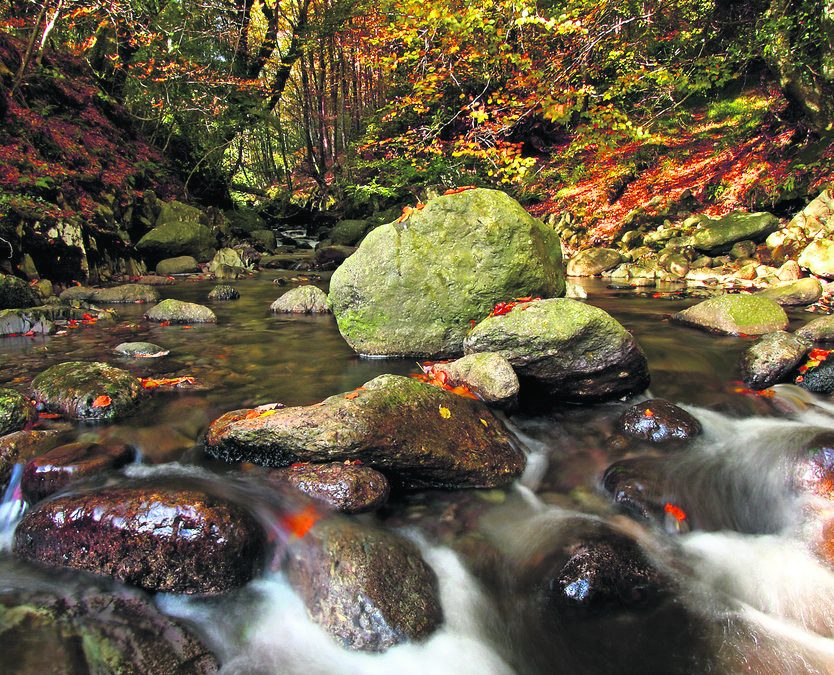 A major positive from our recent pandemic experiences has been the popularity of County Waterford as a staycation destination. Huge crowds of tourists made the Déise their destination of choice in both 2020 and 2021.

Proving that Waterford’s status as a major tourism player is on the rise, the Waterford Greenway has been named as winner of ‘Ireland’s Best Visitor Attraction’ in the Irish Independent Reader Travel Awards 2022.

Some of the comments by Irish Independent included: “The surface is perfect, and with coffee and lunch stops for treats along the way, and a super choice of places to eat, drink and stay in Waterford and Dungarvan”; “It is always alive with people”’; “It promotes exercise, social get-togethers of families and mental well-being through its safe routes”; and “It soothes the soul.”

Michael Walsh, Chief Executive of Waterford City and County Council, added: “The Waterford Greenway has been transformative for the county.  It’s not just locals who are benefitting, but as evidenced by this award, visitors from right throughout the country.”

Meanwhile, Johnny Brunnock, Trails Officer with Waterford City and County Council, added that the combined efforts of locals and the business community had helped to create a fantastic amenity that the county can be very proud of.  “It’s been a tough two years for everybody, but amenities like the Waterford Greenway give people the opportunity to get out and about, and stay connected, while taking in some of the most breath-taking scenery that the county has to offer,” he said. 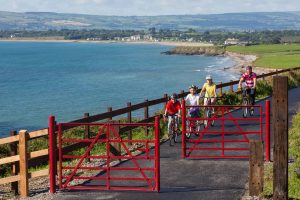 The Waterford Greenway has been named as winner of the ‘Ireland’s Best Visitor Attraction’ in the Irish Independent Reader Travel Awards 2022.

No stranger to accolades, the Waterford Greenway made an impact with Irish Independent readers in 2019 when it was named ‘Ireland’s Favourite Adventure’ in the Irish Independent Reader Travel Awards, while in 2021 it was awarded silver in the Excellence Category at the 10th European Greenways Award Ceremony.  In 2020, Waterford Greenway was the first Irish Greenway to attain Green Flag status, which it retained in 2021.

Such a high-profile accolade will undoubtedly help attract even more tourists to County Waterford.

However, while we all want Waterford to progress even further, we must ensure that proper amenities are in place at all of our major tourism attractions. At Council meetings throughout the past two years, it has been acknowledged that there has been “significant congestion” at beaches and other scenic locations across Waterford.

“Around the county, be it our beaches or mountains, we’re seeing significant demands,” stated Senior Engineer Gabriel Hynes last year.

A plethora of issues were raised once again at the January Comeragh District meeting of Waterford City & County Council which was held last week. Councillors expressed an eagerness to address various issues at our tourist locations before problems arise again this summer.

Cllr Liam Brazil (FG) asked about the Council’s provisions for campervans. He pointed out that the period from April through to August is expected to be very busy.

“We don’t have anything in our Development Plan for camper van parking,” said Cllr Brazil. “We must promote this along the coast as much as possible.”

In response, Gabriel Hynes reiterated that there were “significant demands” in relation to parking along the Copper Coast last year, specifically mentioning both Bonmahon and Kilmurrin.

He said the Council could explore the possibility of working with some local landowners to see if they could acquire additional land for use during busy periods. However, Mr Hynes said there may be issues in relation to insurance and managing such facilities.

“I agree, now is the time to work on this and we would welcome input that you might have,” he added.

He suggested some community groups may like to come on board and indicated that the Council would be receptive to such co-operation. 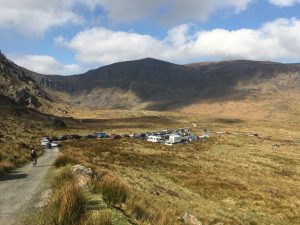 A new cark park is planned for accessing the Mahon Falls.

The Mahon Falls have been a popular County Waterford tourist destination for many years, but the area has also experienced a rise in popularity recently. Atmospheric concerts have been staged at the majestic location as part of the successful ‘Comeraghs Wild Festival’.

An upgraded new car park is proposed for the Mahon Falls, and an update on this project was sought by Councillors last week. Cllr Brazil sought information regarding the latest status of this project and asked if work would commence this year.

Meanwhile, there was more positive news in relation to the new car park for nearby Mahon Bridge. The Council is currently working on tender documents, funding is in place, and all the statutory processes have been completed. Work at the site is likely to commence by the summer.

This car park will cater for the huge popularity of Crough Wood which has also brought more visitors to this beautiful part of Mid-County Waterford. The walk was a project undertaken by the hardworking and enthusiastic Comeragh Community Development Group in conjunction with Coillte.

The amenity which they have created is a wonderful example of community collaboration and a brilliant showcase for what can be achieved when people work together for the betterment of their area. It has proven hugely popular with local people and visitors alike since opening in 2007.

It has featured prominently in national media, including high profile slots on RTÉ’s ‘Nationwide’ on a number of occasions. The wood is a haven for wildlife and has become a favourite location for many artists and photographers. Many schools from the county and beyond visit the area and use the wood as a nature walk. Subsequent extensions to the walk have been completed in recent years.

Cllr Brazil praised the amenity at last week’s Comeragh District meeting, describing it as being in a “prime location” in County Waterford.

He highlighted the positive economic spin-offs which the walk has created.  Two successful coffee shops are now operating in the area – Crough Coffee, from the team behind the popular Coach House Coffee in Kilmacthomas, and Cooney’s Yard which opened last autumn and has already attracted rave reviews.

Highlighting this activity, Cllr Brazil pointed out that the Crough Wood walkway has helped generate around 16 jobs.

In recent times, Coumshingaun in the Comeragh Mountains has become one of the most famous locations in Waterford. Coumshingaun is regarded as being one of the finest examples of a corrie lake and attracts outdoor activity enthusiasts of all ages. 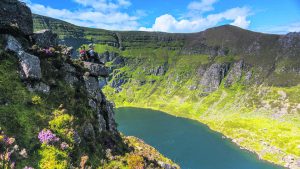 Coumshingaun is regarded as being one of the finest examples of a corrie lake and attracts outdoor activity enthusiasts of all ages.

The Coumshingaun Loop Walk, which begins at Kilclooney Woods and travels around the lake, is hugely popular with locals and tourists alike. However, as has been well documented, there have been ongoing issues in the area as people flock to explore the area.

As a regular visitor to this scenic location, I can testify to the enormous growth in its popularity in recent times. This growth can be clearly seen in the dramatic rise in the number of cars parked at the Kilclooney Woods car park during a typical weekend. In fact, on a recent January Sunday morning I arrived at the car park at 8.30am to find it full to capacity.

The surge in visitor numbers has resulted in cars often lining either side of the busy R676 Leamybrien to Carrick-on- Suir road. In 2019, signage was erected, and double yellow lines put in place to deter motorists from parking on the road. However, the double yellow lines have been routinely ignored by some, resulting in many motorists being landed with fines.

At last week’s meeting, Councillors issued a warning that parking issues at Coumshingaun are likely to prove a “nightmare” again this year. Disappointingly, discussions with landowners Coillte and Curraghmore in relation to constructing a larger car park have not progressed successfully yet.

Gabriel Hynes explained that no significant progress has been made to secure the additional land necessary to extend the capacity of the existing car park. The issue of addressing parking for Coumshingaun is compounded by the fact that the walk isn’t officially recognised.

“We have to be really careful from a liability perspective in terms of signing and directing people along a non-compliant route,” said Head of Enterprise with Waterford City & County Council Richie Walsh at a previous Council meeting.  “One of the main issues with the access route to Coumshingaun is that it is ‘unregistered’ and doesn’t comply with Sport Ireland criteria.”

However, he said the time had come to finally address these issues.

“Proper and safe access to the Comeraghs is hugely important and something that needs to be advanced,” he said.

An alternative put forward in recent times has been to explore the possibility of opening-up nearby Crotty’s Lake to a wider audience.

Cllr Seanie Power (FG) described Crotty’s Lake as a “wonderful facility” which would offer plentiful parking. He said he had already discussed the provision of parking with a local landowner.

His party colleague Cllr Brazil supported this suggestion, stating: “If Crotty’s Lake could be explored, it would be an ideal situation.”

It’s been a long time coming, but Waterford has finally taken its place among the top tourism counties in Ireland. Gone are the days when the Déise was merely a stopover by tourists en route to West Cork and Kerry.

As the popularity of our outdoor locations shows no sign of waning, let’s hope ongoing issues can be addressed as speedily as possible to ensure we remain the destination of choice for many future visitors.