Hopes of 'Turning the Tide' 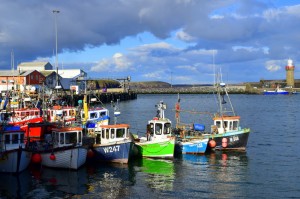 Acknowledging that ‘adventure tourism’ has been developed well in Dunmore East, Dr Byrne feels the success of the Adventure Centre provides local proof, developed over several years, that a worthwhile project can create a buy-in from residents and visitors alike.
As for what events or initiatives could be developed to promote and develop tourism, staging further events in Dunmore East, in addition to the Food and Bluegrass Festivals, led the way. This question was answered by 105 respondents, with the next five areas identified all breaking down pretty evenly in terms of respondents views, namely: aqua tourism, parking, traffic management and public transport, village and coastal walks, heritage, as well as additional hospitality and leisure facilities.
“Holding events at different times of the year was seen as having considerable potential when it comes to attempting to extend the tourism season as it currently stands.”
As for the development of yacht facilities in Dunmore East, Dr Byrne admitted that this question elicited some “mixed views”, including the following comments: “There is a target audience for this in Dunmore but I am unsure as it may take the ‘little’ beautiful village and turn it into something bigger.”
Wrote another: “I am unsure as it would potentially have an impact on the fishing sector. It would have to be considered when developing. Wouldn’t the pier need to be dredged before this was considered?”
Another respondent noted: “No problem with a boat dock as long as it is realised that although tourism is now the main income to the village, it is the fishing industry that should be developed firstly.”
However, of the 106 respondents who replied to this question, almost 65 per cent were in favour of such a development.
“There should be a boat building company/training facility based within the harbour,” said one supporter.
“At the moment, the sailing season runs from June to mid-September (three and a half months). With a good marina, this could be extended from Easter to the end of October (i.e. seven to eight months.”
Another advocate noted: “A visiting boat dock/marina is a huge opportunity for Dunmore as there is little in this regard between the UK and Cork. This could generate a lot of high value tourism.”
A third supporter wrote: “Sounds like a good idea. If it attracts more boats, people and money, then it should be a winner.”
Interestingly, tourism operators ranked seventh in the eight sectors listed under the survey’s eighth question: ‘Which groups do you feel require more supports in Dunmore East?”
The eight groups, listed in order of preference were:
1: Fishermen, 2: Youth, 3: Unemployed, 4: Small Business owners, 5: Families, 6: The Retired, 7: Tourism Operators and 8: Other.
Branding of the area, both from a tourism and product-related perspective, was also referenced by survey respondents, said Dr Byrne, feeding into the concept of capitalising on Dunmore’s marine produce, which we reported on in last week’s edition.
“I think a lot of people in the locality feel that there is something special about Dunmore East but that as things stand, the village is being somewhat under-marketed,” she said.
“With that in mind, I feel respondents feel we ought to capture this through promotion of the village’s fish and tourism products.
“This follows on from work already undertaken in this area by both WIT and the FLAG group on branding, and the village is fortunate that such a body of work has already been done and provides a foundation for future development on that particular front.”