County Waterford farmer Thomas Power (40) suffered a ‘silent heart attack’ three to seven days before he died during an ambulance transfer between University Hospital Waterford (UHW) and Cork University Hospital (CUH).
At the inquest into Mr Power’s death at Cork Coroner’s Court on Thursday last, cardiac consultant Dr Ross Murphy told Coroner Philip Comyn that “silent heart attacks are worse than heart attacks with severe pain”, with many sufferers not reporting symptoms that would prompt urgent medical assessment.
Mr Power died on June 18th of last year due to three centimetre rupture in his cardiac wall which had been brought on by “a silent heart attack”.
This led the inquest jury to returned a verdict of death by natural causes. However, the jury also issued a recommendation that resuscitation drug packs provided in ambulances for patient transfers between hospitals, should be reviewed. 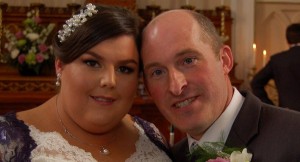 The late Tom Power and his wife Bernadette pictured on their wedding day.

This was based on the fact that the ambulance carrying the late Mr Power ran out of special adrenalin doses while en route to Cork.
Dr Murphy said the outcome from such major ruptures in the heart wall are normally dismal.”
“It is a very, very big tear – you can die from a 0.25cm tear. It is a most feared complication (from a heart attack).”
Dr Murphy told the Coroner’s Court that he didn’t believe having an operation cath lab at UHW in Mr Power’s instance would have made any difference.
“I have no evidence that it (a cath lab) would have made a difference – a cardiac theatre, perhaps,” he stated.
The inquest was told that Mr Power would have needed immediate draining of the fluid around his heart, with emergency open heart surgery required to repair the 3cm tear. Such work would have to have been undertaken in a matter of minutes to save him. But such major cardiac surgery is currently only available in Dublin, Cork and Galway.
Tom Power went into cardiac arrest after the ambulance carrying him had passed through Dungarvan en route to CUH. This was due to UHW’s cath lab being closed on that Sunday – and every Sunday under its current care designation.
The ambulance carrying the ill Mr Power ran out of adrenalin during the trip to Cork and had to be replenished en route by a Cork-based ambulance.
Another cardiac expert who addressed the Court, Dr John O’Dea, said the adrenalin would have made no difference in terms of Mr Power’s critical underlying problem which was the “gaping hole in his heart wall.”
Due to emergency treatment stops between Dungarvan and Midleton, the trip to CUH took a total of one hour and 41 minutes to complete – no air ambulance transfer had been sought.
Despite the best efforts of nurses and doctors in the ambulance to resuscitate him, Tom Power was pronounced dead at CUH at 1.50pm, shortly after arrival at the hospital.
A day later, Assistant State Pathologist Dr Margaret Bolster conducted a post mortem examination and found that Mr Power had a large three-centimetre rupture in the free wall of his heart. There was also 400ml of blood in the pericardial sac around his heart instead of the normal 10ml. This had compressed the heart and stopped it from filling with blood to pump around the body.
Dr Bolster estimated that Mr Power had suffered his “silent heart attack” between three and seven days before his death: this hard weakened the free wall of the heart which subsequently ruptured with ‘catastrophic consequences’.
Dr Murphy admitted: “I have never seen a (heart wall) tear like this.”