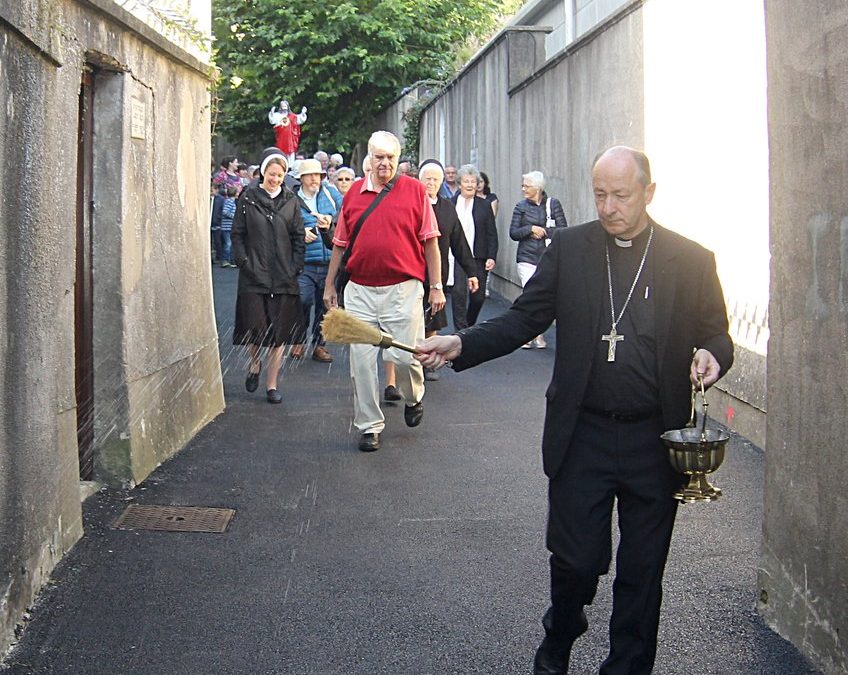 The laneway to the oldest Catholic Church in Waterford, and possibly Ireland, has been officially opened and blessed.The gates to St Patrick’s Church, located off George’s Street in the heart of Waterford City, were officially re-opened last Friday morning, September 13th and the Bishop of Waterford and Lismore, Alphonsus Cullinan was present to bless the new tarmac surface and all those present.

In recent years, concerns have been raised over the future of the church which had become somewhat forgotten and was mainly used by members of the Polish, Russian Orthodox and Syrian communities. Access was only possible from the Jenkins Lane side, and the laneway from George’s Street had appeared in an unsightly state due to the large presence of weeds.
There were also structural concerns with a neighbouring building.
In 2017, Bishop of Waterford & Lismore Alphonsus Cullinan outlined his intention to provide improved access, saying he believed there would be considerable footfall if the access route from George’s Street was re-opened. Originally a corn store which was converted to a chapel during Penal Times, the earliest recorded date in the church register is 1706.
Its hidden location off George’s Street was suited during the Penal Times because of restrictions on Catholic services.St Patrick’s is the oldest church in the city and believe to be among the oldest in the country. Local Historian, Daire Keogh explains how Blessed Edmund Rice, Founder of the Christian and Presentation Brothers often attended St Patrick’s as a young merchant:
“About the year 1790, at the age of 28, he joined a number of young men in Waterford who formed a pious association, under the influence of the Jesuits. This was to be a particularly formative period in Rice’s life; it was within this circle that he was introduced to the wealth of Jesuit spirituality. The Waterford group met in St. Patrick’s, the ‘Little Chapel’ in Jenkins Lane, and its members were committed to living more active Christian lives, along the lines promoted by St. Ignatius and his early companions. Among the various duties they promoted were: private prayer, spiritual reading, the practice of charity, and the frequent reception of the sacraments of the Eucharist and Confession…. This was a radical commitment, since frequent communion was then uncommon.”
A large number of people turned out for the early 9:30am opening and blessing on Friday last where the Bishop said prayers in the church, before the blessing of the new lane-way took place outside.Cllr Pat Fitzgerald (SF) was in attendance and shared his delight at the reopening of St Patrick’s. “My mother brought me here as a child and I always felt that there was something missing from the city when I passed by and these gates were closed. It is a historic gem in the middle of the city that reminds us all where we came from,” he said.
The Apostles of the Sacred Herat of Jesus Waterford City, who were instrumental in ensuring the project was completed, said they were delighted that their vision has become a reality and said: “May many people be touched by the Sacred Heart of Jesus who greets them as they pass by.”