The Spraoi Festival was suitably superb, as the fine Bank Holiday weather aided and abetted the sterling effort of TV Honan’s team of volunteers, in addition to the outstanding and varied level of skilled street performers. We met TV while watching the dance set by the Traces Dance Ensemble on Gladstone Street, where participants with special needs performed a brilliant dance act choreographed by Jess Rowell.This was a typically brilliant Spraoi when it came to the quality of street acts, including the Irish Italian Fanzini Brothers who were back again performing on Hanover Street and getting great audience participation. 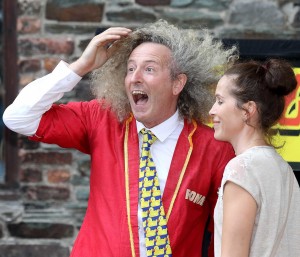 ‘Ronaldo’ told The Munster Express that the Waterford audience really get the whole idea of free flowing acts “and are not afraid to participate with the artists and even be made fun of”. it certainly adds to the audience enjoyment. Our resident critic Liam Murphy also complimented their circus style act! We especially liked the Primitives Act from Belgium and Germany. Called ‘Three of a Kind’, they looked like businessmen in suits, starting with a Breton style linked dance then followed various mime acts that had the crowd really involved, pointing fingers at their audience, including photographer, Noel Browne who got their attention too and participated in the craic. They were equally popular the following day (Saturday) on The Mall. The Flying Dutchmen were also well received down on the Mall on the same day with their ‘Sky’s the Limit’ act. They produced top quality stunts, up to the standard of a leading circus act., and all blended with a unique sense of humour, in what was an Irish premiere. 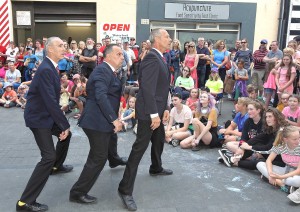 Three of a Kind went down a treat on Hanover Street. | Photos: Noel Browne

A Slovenian artist also had a show involving hidden artworks on street corners called ‘The Streetwalker Gallery’.Waterford Youth Arts had staged some good shows, with one titled ‘Weird, Wacky and Wonderful’, directed by Enda Moran.Waterford Breakbeat staged a dance session down at the Applemarket on Saturday. Lots of people sitting around outside the bars and taking in the acts in what was lovely sunny weather. Thousands more enjoyed this locale when watching the over-sized bugs pass under the Applemarket roof on Sunday night, an event which ended with the traditional fireworks display. Cir Panic from Catalonia proved another great circus style balancing act, putting on a dangerous-looking but skilfully performed show.
The Spraoi Orchestra also had a busy time performing over the weekend with some new talent coming into the set. Meanwhile, the City of Waterford Brass were all dressed up ‘informally’ on Saturday and their music was well appreciated near the Bishop’s Palace museum, while the Barrack Street band played popular pieces on The Mall too playing.
A Clonmel rock chorus group were a new addition on Sunday, singing tracks from Queen , Bowie and Kate Bush (the recently turned 60-year-old whose mother is from Dungarvan).
On the music front there were a huge range of genres to enjoy. We caught the excellent Two Time Polka from Cork outside The Munster and Reg on Bailey’s New Street and there was a lovely atmosphere there on Saturday afternoon. 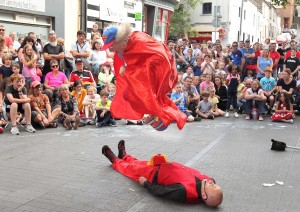 At John Roberts’ Square, Dublin-based favourites Buffalo Soul were pumping Bob Marley hits with their tribute band playlist and got the crowd grooving.
They were followed by the 10-piece Papa Zitas with a great combination of brass and female singing acts from Cork. The group’s three singers have great voices and their sound really carried around the city centre as we walked up from John Street.Meanwhile, at the Cultural Quarter there was also a nice vibe outside Tully’s, where a series of bands played.
Oatzie Jones played with her band on Saturday and it was great to see young local talent being enjoyed by local fans, such as Amber and the Bear, Ed Hill, Dezoot and Mufasa: talent to watch for in the future. 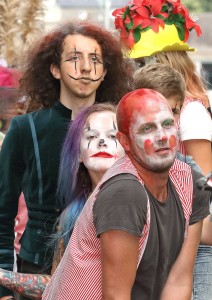 WIT Calmast staged a science display on Hanover Street on Saturday to great level of curiosity while the Saturday Session at Geoff’s once again proved a popular rendezvous point, featuring Ashley Sheehan and the Fighting Spiders (Depeche Mode-like) as well as Shane Barry and the Night Post.
Unfortunately we missed the set by Microguagua from Barcelona, whom we’d seen before and the programme was outstandingly strong despite the competition from All Together Now in Curraghmore.
But it’s fair to say that these events occupy different market segments and it was great to see some of Spraoi’s exotic creatures in situ in Curraghmore over the weekend. ,
We clearly have lots of talent and culture in our region and it’s wonderful to see us making a greater national impact with such events.