Eoghan Dalton Reports
A SPORTS club in Tramore has sprung into action over fears that the hall will be demolished and the site sold to a property developer.
Tramore Basketball Club was recently told by the old CBS hall’s owners, the Edmund Rice Schools’ Trust (ERST) that it must sign a rolling one-month agreement or face eviction, despite the club being tenants of the Christian Brothers for more than 30 years. The club said it would be a “travesty” if the space was lost to the community. 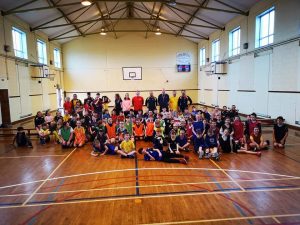 A group shot from a recent kids' blitz in the hall. The club coaches over 200 children and intends on entering mixed teams in the Under-14, Under-16 and Under-18 Leagues as the children currently at Primary School level progress. The club is also canvassing interest in establishing a women’s senior team.

A sports club in Tramore has sprung into action over fears that the hall will be demolished and the site sold to a property developer.
Tramore Basketball Club was recently told by the old CBS hall’s owners, the Edmund Rice Schools’ Trust (ERST) that it must sign a rolling one-month agreement or face eviction, despite the club being tenants of the Christian Brothers for more than 30 years.
The club said it would be a “travesty” if the space was lost to the community. It outlined its concerns in an open letter released over the weekend, in which it claims that the hall is set to be sold by the Trust to a developer and it now believes the prospective new owner will knock down the hall on the site. A petition launched to show support to the club is well on its way towards receiving a thousand signatures at the time of writing.
“We have been told by the Trust that we must sign a rolling one-month licensing agreement or we will be evicted,” reads the letter from the club, which coaches over 200 children and saw its senior men’s team win the Kilkenny-South East Area League in 2018 for the first time in over a decade.
“Signing this licensing agreement would mean that we thereby give up any rights we currently have as tenants for over thirty years.”
The club requested that the Trust hand over the hall, located on St Otteran’s Terrace, to a group formed as a Company Limited by Guarantee, a formation typically used by charities and community groups, with the intention that the company would run the hall as a “community resource for all clubs, societies, organisations and groups of the town”.
However, said the club, “the ERST has rebuffed these efforts and will not engage in any meaningful way with us”.
The club maintains the activity would “fly in the face and spirit” of the Tramore Local Area Plan 2014-2020, which emphasises that the town needs recreational activities as well as indoor and outdoor facilities.
According to the plan: “Communities need opportunities to meet socially and to interact and form bonds, and these are essential prerequisites to the development of a sense of place and a feeling of belonging.”
Glór na Mara Primary School also uses the hall while other clubs have expressed an interest in making use of the hall, said the club.
It added: “Surely a town the size of Tramore, with a rapidly-growing population, needs an all-weather, year-round facility such as this which could cater to the needs of a diverse range of community groups and clubs.
“In many towns in this state people are actively fundraising for the money to build this types of facility; it would be an incredible and appalling state of affairs if one already built was to be demolished. The club goes on to say that funding is available to upgrade the hall if the Trust were to hand it over and drawings have even been designed to demonstrate the vision for the premises. This would include converting part of the upper floor into meeting rooms to cater for different local groups. Although these plans are some way off being realised according to the club.
“The situation as it stands is that our hall, which was built with money raised by our community, in which 200 children a week are training and more, with the potential to grow into a busy social hub for the people of the town, is to be demolished.”When contacted for comment by The Munster Express, the ERST said it had not read the letter and confirmed that an offer of a one-month rolling license had been offered to the club.
“This has not been changed in any way and we intend to continue to honour this rolling licence. The basketball club has always been welcome to use the hall within the school.“The old CBS Tramore site is currently under offer and is subject to contract. We are hopeful that the new owners can honour this community arrangement, however, we will not have a role in such decisions.”