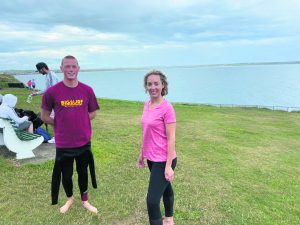 ‘Significant demands’ on Waterford locations
Waterford is reaping the benefits of Ireland’s staycation surge, with crowds flocking to popular locations countywide.
The high profile ‘Visit Waterford’ advertising campaign, which encourages Irish people to holiday in Waterford this summer, appears to be reaping rewards for the local tourism industry.
Hoteliers have reported varying degrees of demand for accommodation, with some city hotels being adversely impacted by the lack of coach tours from the UK.
However, other accommodation providers have reported brisk demand due to the rise in domestic holidaymakers. Huge numbers of campervans have also flocked to seaside locations.
The increase in visitor numbers, combined with local day trippers, has created issues according to a Waterford City & County Council official.
Senior Engineer Gabriel Hynes acknowledged there has been “significant congestion” at beaches and other scenic locations across Waterford.
Responding to issues highlighted by Councillors at the July Comeragh District meeting of Waterford City & County Council, Mr Hynes said: “Around the county, be it our beaches or mountains, we’re seeing significant demands.”
At the same meeting, Head of Enterprise with Waterford City & County Council Richie Walsh said there is “huge demand” on Waterford’s outdoor amenities at present which he described as “fantastic”.
However, he said it’s now important to turn that demand into “greater economic gain”.
“A lot of people using beaches and mountains are day trippers, rather than people spending some money here,” he said.
RTÉ presenter Kathryn Thomas was in Tramore on Saturday last filming an upcoming show about Irish staycations.
The Carlow woman enjoyed a swim at the Guillamene and also travelled along the Copper Coast with a TV crew. The show is expected to air in August.
Meanwhile, Waterford travel agents say they have seen a slight increase in demand for holidays to Italy and Greece following the publication of the government’s ‘Green List’ last week.
However, staycations appear to be the first choice for all planning a summer break.