The search for Jimmy O’Neill straddles eight different decades
The brother of a Waterford boy who went missing in December 1947, aged 16, has not given up hope that the longest missing persons case in the history of the State may yet be solved.
Speaking to The Munster Express this week, Frank ‘Frankie’ O’Neill of Leamy Street, spoke movingly of his life-long search for information about his elder brother Jimmy, who was working for the Clyde Shipping Company at the time of his disappearance.
Frank was just four years of age at the time Jimmy, born on Morgan Street in 1931, went missing on December 15th, 1947. And since he could first call upon his own memory, Frank’s life has been racked with curiosity over what became of his elder brother.
“Every November, when I’m submitting my list of the dead, Jimmy has never been on that list, as I and none of my family have ever had any knowledge of his whereabouts, and whether he’s dead or alive, so he’s never been on that list.”
So where did Jimmy go? “Well, we just don’t know. All these years later, and it’ll be 69 years in December, we have no idea. Given that he worked for Clyde Shipping, we’ve long since suspected that Jimmy must have left Waterford on board a ship, be it to Liverpool or elsewhere. He must have built up some contacts and friendships during his time working there and if he did stow away, wherever he disembarked, he must have been given some direction or leeway about where to go.”
Frank added: “Sadly, the Clyde shipping archive and manifests from that time had since been dispensed with and who knows, maybe some detail in there might have offered me a hint about what became of Jimmy. But here I am, all these years later, a man in my 70s, wondering what became of my 16-year-old brother almost 70 years ago.
“I’ve carried this around with me for every day of my life, and I’m all my life trying to get a lead or to establish something about what happened to Jimmy, but this is something I’ve failed to do over all of these years. It’s led me to make enquiries across many different countries – be it Australia, New Zealand and South Africa, but I’ve never made a breakthrough.
“And ever since my school days in Mount Sion, when I’d the brothers up there asking me about Jimmy, I’ve never given up the hope of finding out what happened to him. And it’s been very, very hard to live with, over all that time. Where did Jimmy go?”
Frank, who provided his DNA approximately three years ago in the hope that it might lead to a long-overdue breakthrough in the case, has no memory of his older brother. “You have to remember I was only gone four when Jimmy went missing; memories from that age are hazy for most of us, and I was no different from most in that respect…
“I grew up with hardship; my mother crying going down the town; people asking was there any news about the nipper, Christmas time, the anniversary, the Nuns coming up to the house on Leamy Street every Sunday, many questions and a great deal of sadness…sport, and hurling in particular, was my escape from that sadness and the unanswered questions about Jimmy.”
Frank continued: “On my mother Bridie’s deathbed in 1974, a nurse told me she’d been calling for Jimmy all night in the house before she died, and to be told that was absolutely heartbreaking – my father, Jim Snr, passed away in 1966, and the trauma of Jimmy’s disappearance left a huge mark on both of them….
“My brother’s disappearance remains a complete mystery all of these years and throughout that time, I’ve always hoped I could unearth something, to try and bring some relief, even happiness for a few of us, to know what became of Jimmy. And it would mean something beyond words to find out something. And please God, that might still happen.”
Frank’s eldest brother, the late author and historian Jack O’Neill (1928-2012) was a regular contributor to The Munster Express for several decades and was the city’s leading authority on the railway network during a life well lived. 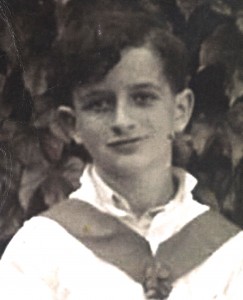 Jimmy O'Neill was aged 12 or 13 in this photograph was taken during his altar serving days at the Dominican Church on Bridge Street. He went missing in December 1947 and his missing persons case remains the longest unsolved case of its kind in Ireland.