Management at University Hospital Waterford (UHW) have issued an urgent appeal for people to contact their GP prior to attending its extremely busy Emergency Department.
Due to a high volume of people presenting at UHW, strict visiting restrictions are now in place to try and prevent the spread of flu. 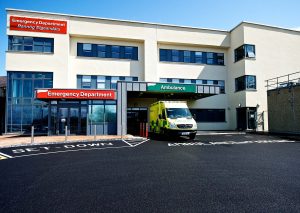 Hospital management is appealing to both adults and children who are experiencing any signs or symptoms of influenza to contact their local health provider (GP/Caredoc out of hours service) in the first instance prior to attending the Emergency Department.
According to a statement issued yesterday (Monday), the Emergency Department at UHW is currently extremely busy and, in the interest of patient safety, the hospital is reminding the public that they should only present at the ED when referred by their local GP.
Management says that they hope guidelines will be followed in “the overall interest of patient safety” and reminds members of the public that it’s not too late to get the flu vaccine.
Strict visitor restrictions were initially implemented on Friday December 20th to help prevent the spread of flu.Meanwhile, the Irish Nurses and Midwives Organisation (INMO) says the level of hospital overcrowding has reached a record level, labelling Monday January 6th as the worst-ever day for trolley overcrowding since records began.
The worst-hit hospitals include University Hospital Limerick (92); Cork University Hospital (56); University Hospital Galway (47) and South Tipperary General Hospital (40).
At UHW, there were 30 patients on trolleys in the Emergency Department and four in wards elsewhere in the hospital.INMO General Secretary, Phil Ní Sheaghdha, said: “Ireland’s beleaguered health service continues to break records in the worst possible way. Our members are working in impossible conditions to provide the best care they can.”
She added: “The excuse that this is all down to the flu simply doesn’t hold. There are always extra patients in winter, but we simply do not get the extra capacity to cope. This is entirely predictable, yet we seemingly fail to deal with it every year.”