Kieran Foley reports
KEEN to promote the names of local townlands and rivers, members of Mullinavat Comhaltas Group took matters into their own hands as part of Millennium 2000 celebrations.
At dawn on the first day of the new Millennium they started erecting limestone plaques on the borders of each townland with the original Irish names on them.
The project aimed to erect plaques to identifying different townlands in the area along with streams ‘as Gaeilge’.
From the outset, the group teamed up with FÁS and this partnership has continued down through the years.
So far, around 190 plaques have been erected in the area and the response in the locality has been very favourable.
Some of these original names had been almost lost or anglicised.
The plaques on the streams are curved to reflect the shape of a bridge and to distinguish them from the townland names.
Plaques are regularly repainted, repaired etc.
The project received funding from a number of different sources.
Similar projects have been undertaken in most of the Gaeltacht areas (including An Rinn) but it’s believed the South Kilkenny project was the first of its type outside the Gaeltacht.
New council signage ‘out of character’ 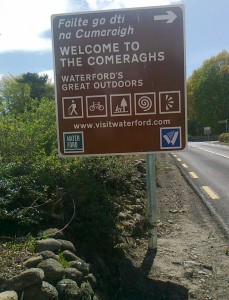 NEWLY erected signage, which promotes features of the Comeragh District, has been described as “out of character”.
Although Waterford City & County Council has stated that it wishes to “limit signage in the countryside” (in response to calls to identify local townlands), the local authority has recently erected huge signs across the Comeragh District which have generated some concerns.
The local authority has erected new signage promoting attractions such as the Comeragh Drive in a number of locations across the district including Mahon Bridge and Rathgormack.
At the April Comeragh District meeting of Waterford City & County Council, Cllr M J O’Ryan (FF) said he was delighted to see that the signs had been erected.
“We have been waiting for a long time for these signs to welcome people to our area which is the jewel in the crown of County Waterford,” he said.
However, Cllr O’Ryan said he would have liked to have seen more interaction with local communities before the signage was put in place.
“Some of the signs are a little bit out of character for small rural villages,” he said.
Cllr O’Ryan highlighted that the size and location of some of the signs may need to be addressed.
“While I welcome them, and don’t want to throw the baby out with the bathwater, maybe we need to look at where these signs are going in order to get the best bang for our buck,” he said.
While he said he was glad that attractions such as the Nire Valley Drive and Comeragh Drive were being promoted, he called for increased interaction with communities and local councillors.
Meanwhile, Cathaoirleach of the Comeragh District Cllr Liam Brazil (FG) said some signs were actually located in dangerous areas.
He said it was fantastic to see new signage around the area but agreed that there was a need to talk to local communities.
“Some of these signs are in the wrong place, especially the signage in Mahon Bridge which is actually dangerous,” he said.
However, Cllr Brazil said the signage was a great initiative and showcased the attractions in the area.