Home » All Front Page News » Top Stories » Taoiseach: "We Must Atone for a Lost Decade"

Taoiseach: "We Must Atone for a Lost Decade"

Taoiseach Leo Varadkar says that the current Government – and future administrations – must make every effort to atone for a ‘lost decade’ on a range of fronts, including housing, health, transport and education.
Speaking at the ‘Project Ireland 2040’ roadshow held at the WIT Arena on March 9th, Mr Varadkar stressed the need to “embrace long term planning so that we don’t repeat the mistakes of the past, but secondly, catching up on that lost decade by really speeding up investment in our infrastructure and, as Paschal (Donohue) said, we’re going to go from a country that invests less in the European average in infrastructure, to one that will be well above the European average within four years, and one that within 10 years, will be one of the highest investors in infrastructure in the European Union, and that of course makes sense since we have to catch up on that lost decade. We’ve a young population, unlike most countries in Europe; we’ve an expanding and growing population unlike most countries in Europe and, unlike most countries in Western Europe anyway, we’ve only really become a wealthy country in the past 20 or 30 years.”
Mr Varadkar said he understood why the public could be “sceptical of grand plans, particularly grand plans being carried around by politicians” but added: “I don’t think we should be too cynical”. 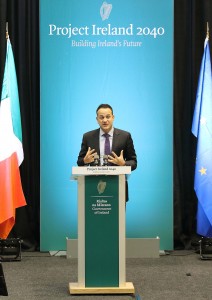 Referring to the launch of the Fianna Fáil-led National Development Plan back in 1999, Mr Varadkar recalled how it included the proposal for a motorway network, including routes linking Waterford and Cork to Dublin.
“And yes, that was done, so we have seen in the past plans like this being delivered and even where things weren’t delivered or run into problems such as the National Children’s Hospital, for example, they mightn’t happen on time but they do happen so everything in these plans (the National Planning Framework and National Development Plan [2018-2027] will happen.”
Stating that Project Ireland 2040’s statutory footing makes it “the people’s plan” rather than a Government vehicle, Mr Varadkar identified the need to reduce Dublin’s growth (without entirely stymieing it) by boosting and promoting growth in cities such as Waterford.
“The plan is very ambitious because you’re saying to a city like Waterford that has grown by so much after hundreds of years, to say we want it to grow by another 50 per cent in 20 years is very ambitious, but I should say that these are targets – they are not caps – and if cities can exceed them, that’s great and we can raise those targets again.”
Of the one million additional people expected to reside in the country between now and 2040, Mr Varadkar hopes that a fifth of that tally (200,000) should live in rural areas, villages or towns of less than 10,000 people.
He described Waterford as a city that had regrettably “fallen behind its competitors”, and recalled a time when the city was bigger than Galway, citing the lack of a university as an inhibitor to growth over the past 30 years or more.
“The division line between Waterford and Kilkenny has complicated things, the loss of the big industries like Waterford Glass and of course the fact that a lot of population growth happened in other towns, like Tramore, for example so the plan that we have now for Waterford city is to see 30,000 extra people living in the city and its suburbs over the next 20- years…to 85,000…and to those of you interested in politics, that’d be enough to make it a three (Dáil) seater in Waterford city and its suburbs alone, perhaps the county would be a different constituency but that’s a while away, and we want half of that development happening within the existing footprint of the city.” For this to happen, the Taoiseach added: “We’ll have to build up, not out…and to have more compact growth in our cities and towns.” He also stressed the need to curb ribbon developments on the outskirts of many towns and villages with “dead cores – and that’s the kind of thing we need to change”.