We regret to inform readers this week of the death of Jim Harney of Dunhill, who passed away at the Havenwood Retirement Village, Ballygunner on Wednesday last, June 13th.
Jim was a colossus of a man in the village of Dunhill, metaphorically speaking. He ran the local bar and shop for decades and was heavily involved in the local community.
A huge crowd turned out for his funeral in the village church on Saturday last. He was a great man and a fantastic character of the old Irish style.
Jim created a great atmosphere in the bar and loved to sing. A great family man, he loved Dunhill and everything to do with it.
His other great loves were Dunhill GAA and horse racing. It was said he had been in every race course in Ireland, according to his son John Paul and went to Cheltenham for over 60 years going every year from 1954 to 2017, an incredible record.
He also got a huge crowd of racegoers from the village to make the annual trek to Listowel Races where they were made very welcome each year, bringing songs and stories aplenty with them.
He was also partly responsible for the rescue of the Tramore racecourse when it went up for sale in 1990s. Both Jim and the late Joe O’Shea canvassed locally and got great support to buy the racecourse, also receiving backing later from music impresario Vince Power from Kilmacthomas and London and Peter Queally of Dawn Meats and Kill village.
The racecourse rescue efforts took place back in 1997 and thankfully, 21 years later, the racecourse is thriving again with a new company and local shareholders. Jim is still talked about very affectionately by racegoers for his drive and enthusiasm on that front.He also had an interest in a horse or two and recorded a few wins, including one in Tramore.
Last Saturday’s Requiem Mass truly was a celebration of Jim’s life. His great friend Father Flynn celebrated Mass and spoke of Jim with great affection during his Homily.
This was followed by a eulogy offered by Jim’s son, John Paul, who now helps run the businesses. 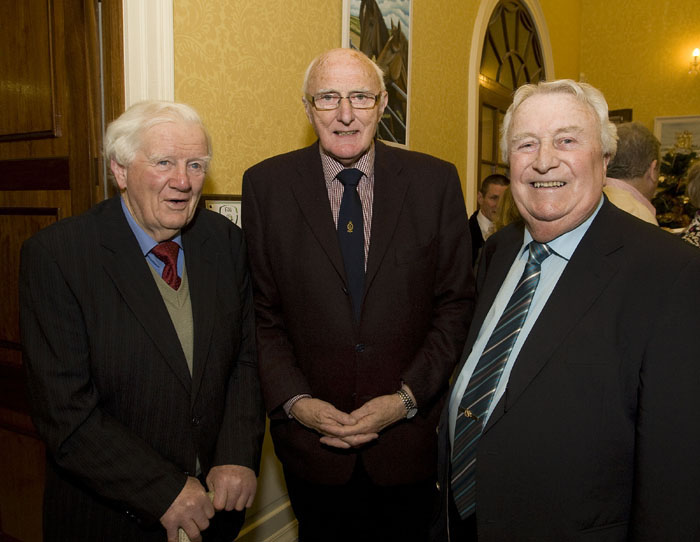 Old friends: pictured at the Tramore Racecourse Centenary celebrations in City Hall in 2012 were the late Jim Harney, the late Eddie Wymberry and the late Joe O'Shea. Mr Harney's Obsequies were celebrated on Saturday last.

John Paul joked how this occasion would be “the final rub out” for Jim, who regularly used that phrase when he was marking scores for the darts, another passion of his.
John Paul jested about the his Dad marrying his mother Mary and how he packed in some race meetings during their midweek honeymoon and got back for the weekend to Dunhill for the darts session and the weekend business.There was a great and deserved round of applause for John Paul in the church when he concluded his affectionate and humorous address.
There were many other points to note regarding Jim’s life said Fr Flynn, when he helped organise the funding which made the purchase of the Dunhill GAA field and subsequent clubhouse construction in Ballyphilip possible: the club fittingly provided a guard of honour at the funeral.When Jim could no longer play GAA, he went to Waterford to stay fit and play squash
He eventually set up a squash court in Dunhill and again organised fund raising for the venture and also got local labour to build it on a low cost basis. A remarkable man, who got things done for his village, Jim Harney was a difficult man to say no to. The community will miss him this village titan, who in many ways was reminiscent of an Irish chieftain of old.
The energy of Dunhill Village, partly inspired by Jim has led to the development of an Enterprise Centre, a Community Centre, the Eco Park and the Anne Valley Walk. The village is an exemplar of a high performing Irish village and community and represents a fitting legacy to Jim Harney’s life’s work. Many local landowners assisted in providing land for such developments to the hard working committees but Jim set the stage and standard in earlier days.He loved visitors coming to Harney’s Pub, which was truly a part of old Ireland. Jim gave visitors a great welcome no matter what county or country they came from. The ribs were legendary in the restaurant and the craic too at times.We can recall having events for visiting French there as part of the Waterford/St Herblain town twinning events as well as accommodating visitors from Newfoundland, Canada for the opening of the Anne Valley Walk; the Power Family Clan Gathering was another.The Choir under Anne and Margaret Moore did a superb job on Saturday last, as did the folk group at the end of the Requiem Mass. Afterwards his life story was recounted by many over food and drink. He lived to over 92 years of age and has really only experienced bad health in the past year. All his Doctors were thanked as were the staff of Havenwood Nursing home and the various carers for him, such as Siobhan and Marcella, Alison and Rita, Annette, Emma and Breda. The offertory procession saw a walking stick being brought to the altar, as well as a race card, a deck of playing cards (no six of hearts) and a squash racket. The other priests to assist in the Requiem Mass were Fr Enright, Fr Condon and Fr Brendan.Much more could well be written of Jim Harney and afterwards people departed the burial ground, sharing fond and interesting stories about their friend. Jim had a word for everyone and will be sadly missed. Jim Harney is survived by his beloved wife Mary, sons Joseph, Brendan, John Paul and Martin, brother Tony, daughter-in-law Maire, grandchildren Lily and Luke, niece Mary and nephew John. May he rest in peace.