"The victims deserve so much more" says Howlin

Those abused by Bill Kenneally deserve much more than a delay in the convening of the Commission of Inquiry due to investigate how their case was dealt with by several State Agencies: that’s the view of Labour leader Brendan Howlin.
The Wexford TD, one of a group of public representatives who urged the Government to establish such a Commission prior to last May’s official announcement, questioned the reasoning presented by the Department of Justice in delaying the Commission’s work. 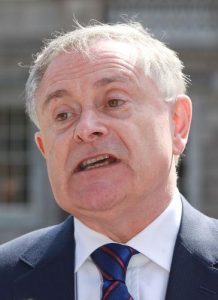 “The greatest disappointment here is clearly being felt by the brave people who waived their own anonymity in order to do a social good: to out a paedophile, to ensure a paedophile was prosecuted and taken out of circulation,” he stated.
“And they have legitimate questions that remain unanswered about how this could have gone on for so long, how the State Agencies in particular (acted – or indeed didn’t act) but others right across the spectrum – the Gardaí, the Health Board, politicians, the Church, each of whom had some interaction with the case over time, how each of them handled it and how a stop wasn’t brought to the awful activities of Bill Kenneally. They deserve to have those questions answered.”
Deputy Howlin continued: “We thought last May, when I attended a meeting with victims, with the Minister for Justice (then Frances Fitzgerald) and her senior officials and she agreed that this investigation had to happen. Formal approval was given by the Government at the time and yet nothing has happened since. Yet now we are told by the new Minister for Justice (Charlie Flanagan) that everything is on hold until such time as not only the investigation of any further accusation which has been made against Bill Kenneally but (until) the prosecution of any further investigation comes to a completion: that could be many years away and there’s a genuine concern that evidence will not be there into the future, that witnesses that could give very important testimony won’t be around, in fact some have died over the last 12 months…so it is an enormous frustration and a denial of justice that we haven’t embarked upon this already so I certainly don’t accept the view expressed by the new Minister for Justice, Charlie Flanagan, that (the Commission) can’t happen until some time in the future when all of the investigations are exhausted.”
After all, such reasoning as that presented by the Attorney General (AG) and Justice Minister last week could, in theory, mean the Commission would never sit.
Citing the Commission which examined complaints of child sexual abuse involving Catholic priests in the Dublin Archdiocese in 2006 and the investigation into the banking crisis, Deputy Howlin said both had been held against “the backdrop of potential prosecutions happening, so I don’t accept that excuse at all”.
He added: “And particularly when an experienced judge (Barry Hickson) has been selected to head up this Commission, who would know how to handle these things, would liaise with An Garda Síochána in terms of current investigations, etc. But much of this is already determined. The 10 sample cases (which Bill Kenneally pleaded guilty to) have concluded; sentencing has happened and there’s no impediment to the questions that are being asked by the victims to be fully ventilated and answered now, in my judgement.”
Deputy Howlin said the promised changes within the Department of Justice and the Gardaí “had to be meaningful for individuals on the ground and nobody moreso than the victims, and the victims in this case suffered horribly”.
The Labour leader has written to both the Taoiseach and the Justice Minister requesting that both they and the AG (Seamus Woulfe) attend a meeting with the victims and he will also raise the matter from the floor of the Dáil when it reconvenes.
“I believe Charlie Flanagan to be a decent individual,” Mr Howlin concluded. “I believe he would meet (the victims) with an open ear and listen to the concerns of people who have been so grievously wronged and I hope the Taoiseach would so likewise…and I’m hopeful that once a meeting is convened and the Taoiseach and Minister for Justice hear the genuine concerns of people who have been so grievously hurt in all of this that a way will be found to ensuring that their questions are answered.”