The scene at Dunkitt Railway Bridge on New Year's Eve. Note the sign to the left of the photo. | Photo: With thanks to Sean Maher

Engineers in the South Kilkenny area believe that the flooding caused by the successive storms of recent week has led to the worst flooding in 40 years, according to Piltown District Chair, Councillor Pat Dunphy (FG).
“When you’re told that between 400 and 450 millimetres of water – roughly 16 inches – has fallen inside a week, and when you consider that the average annual rainfall in Ireland is 35 inches, then it’s not too great a surprise to discover that you’re dealing with the sort of records none of us would want to be facing up to,” he said.
“Whether it’s Dunkitt, Kilmacow, Carrigeen, and just off as well as on the N24 either side of Mooncoin to name but a few areas, there’s a huge amount of damage after being done right across the south of the county and into mid and north Kilkenny. With that in mind, a special meeting of Kilkenny County Council will be held on Friday at 2pm in County Hall to try and devise some methods to deal with what can only be described as an onslaught.”
While praising the hard-pressed County Council outdoor staff, Cllr Dunphy referred to a telling statistic that has been largely replicated in neighbouring counties.
“In comparison to 20 or 30 years ago, Kilkenny County Council in 2016 is now operating with a third of the outdoor staff we had previously, and there’s got to be a consequence to that. Extra staff can’t stop flooding like what we’ve seen, but a greater rotation of staff would have removed some of the burden that’s been shouldered by our outdoor staff, who have done an incredible job in very trying conditions.”
Cllr Dunphy added: “The staff have been working around the clock – they’ve basically had no Christmas at all, and they still require the assistance of the Fire Brigade and local residents to help lighten their load, even a little.”
Flooding on the old Waterford-Dublin road, the N9, at Dunkitt, made it one of the worst affected areas in the county outside of beleaguered Graiguenamangh, Thomastown and Inistioge. 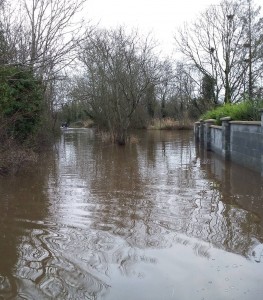 Under water: Dungooley, Carrigeen on December 30th. | Photo: With thanks to Cllr Pat Dunphy

“Since 2009, locals have said it on numerous occasions that the flooding has become a more regular problem – and this coincides with the construction of the nearby M9 (with much of the new route at Newrath build over wetlands).
“Although there is drainage in place which allows the water to pass from one side to another, there is no other course for the water to then run but into the fields or houses along the side.” For example, the residential section of Irish’s Pub flooded, as did some nearby houses.
In the hope of alleviating the flooding, the Piltown District has requested that the Office of Public Works (OPW) send engineers to clear streams and drains which “could reduce the water level by up to a foot”.
Cllr Dunphy added: “This requests were made on several over the last 18 months, but action hasn’t been taken. There have been no less than five reports sent to the OPW outlining what work needs to be done. In the past, this work would have been carried out by the Land Commission, but that body was disbanded in 1999.”
Cllr Dunphy said that hope remains for some homes and businesses that have been damaged by the Storm Frank floodwaters.
A Humanitarian Assistance Scheme is in place which can provide financial aid to homes within a certain income range.
Unfortunately, there is no such mechanism for community organisations, Cllr Dunphy noted, despite deputations made for such provision by local TD John Paul Phelan.
One such unsupported body, for example, is Thomastown GAA Club, who look set to be left with a repair bill running close to €20,000. “Surely they merit some assistance,” Pat Dunphy argued.
Graiguenamangh and Thomastown appeared to bear the brunt of Storm Frank in Kilkenny and, indeed, the entire region , with flood waters running down the Main Streets of both towns, undoubtedly causing hundreds of thousands of Euro in damages.
In Piltown, the River Pill burst its banks on Tuesday night/Wednesday morning last, with the Main Street impassable at the former Foyle’s Garage premises for several hours, with local farmers stating they’d never seen such high flood levels in their adult lives.
At the same time, both the Grange to Clogga Road and the road from Clogga Creamery towards Knockhouse resembled fast running rivers, while roads leading into Carrigeen off the N24 remains treacherous on Monday. The main N24 road between Waterford and Mooncoin, on either side of the town, remained problematic for early morning motorists yesterday (Monday) morning.
[Additional reporting by Dermot Keyes] 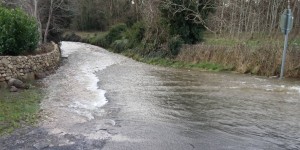 A torrent of floodwater at Portnascully, Carrigeen. | Photo: With thanks to Cllr Pat Dunphy