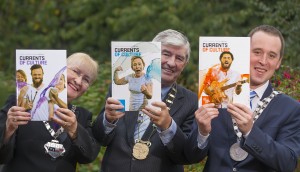 The Bid Book for the ‘Three Sisters 2020’ European Capital of Culture bid was submitted by the Mayors of Waterford, Kilkenny and Wexford on Friday last.
Mayor John Cummins, and Cathaoirligh Mary Hilda Cavanagh (Kilkenny) and Tony Dempsey (Wexford) submitted the document, which has been filed for the comprehensive adjudication process, set to take place on November 12th and 13th.
According to Bid Director, Michael Quinn says, “The Bid Book is an eighty page document which outlines the regional vision by the Three Sisters for the European Capital of Culture year of 2020.
“The book features a great deal of content outlining the story of the region and its people and includes lots of passionate ideas and suggestions which were submitted by members of public during the Three Sisters public consultation period through social media and the Three Sisters interactive website.
“It is wonderful to see so many different names and faces and the huge appetite and commitment, which was demonstrated in the various submissions.”
The three local authorities have been working on the bid since the middle of last year in one of the most comprehensive regional campaigns conducted to date, in what’s hoped to be the launch pad for a new regional marketing brand.
Michael Quinn added: “Overall, this Bid and the bid development process has provided a new foundation for the region, it has built a legacy of working together in partnership and we aim to continue this very successfully into the future.”
This sentiment was echoed by Waterford City & County Mayor John Cummins. “This region’s collaborative approach is unique and it will really unite the three counties into the future. I would also like to thank the Bid team who have collaborated on the project from the very outset and whom have created a fantastic Bid book offering the Three Sisters region the very best chance of success.”
Said Kilkenny Cathaoirleach Mary Hilda Cavanagh said, “I think that the idea of the three counties coming together was inspirational, this level of regional cooperation and collaboration has proven invaluable and the Three Sisters coming together creates an incredibly strong Bid for this title in 2020”
Wexford County Council Chair Tony Dempsey offered a similar refrain: “There is an old saying as Gaeilge, ‘Ní neart go cur le chéile’ which means ‘There is no strength without unity’…
“I am also reminded of another old Irish word ‘Meitheal’ which means the coming together of neighbours and it is in recognising the strengths of our respective counties and pulling together for the benefit of all in the region.”
A shortlist for the 2020 status is expected to be announced in July of next year, with Dublin, Galway and Limerick also bidding for the title.