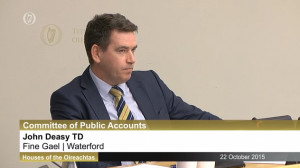 A whistleblower who made claims of horrific sexual and physical abuse at a foster home in the Waterford area over a twenty-year period is to receive extracts from a HSE- commissioned report into the allegations, THREE YEARS after it was completed.
Despite increasing public and political pressure, the HSE has still not published the inquiry report by consultant Conal Devine, which was launched in 2010 and completed two years later at a cost of €124,797.
Now it’s emerged that the Waterford-based social worker, who has previously criticised the HSE for failing to act and the Government’s response to the disclosure, will be shown elements of the report on 24th November. The Dáil’s Public Accounts Committee (PAC), which the social worker provided with an extensive dossier of allegations, has been told that the methodology and recommendations of the report will be made available to the social worker, though no personal information of service users will be released.
The report investigates allegations dating back to the early 1990s that an intellectually disabled, non-verbal girl who lived with the foster family was subjected to years of horrific physical, sexual and emotional abuse.
It’s one of two reviews – costing a total of over €500,000 – which have been commissioned by the HSE into the allegations. The separate ‘look back’ review of all placements with the foster family, conducted by Resilience Ireland, has also yet to be published. It examined claims that up to 40 intellectually challenged children and adults who stayed at the foster home were emotionally, physically, sexually and financially abused. Some service users remained at the home for years after the initial allegations were made.
The Waterford social worker was one of two whistleblowers who provided extensive information to the Department of Health back in 2009 under protected disclosure legislation, citing serious failures by the HSE (and formerly South Eastern Health Board) in mishandling the allegations.
At the PAC last week, local Fine Gael TD Deputy John Deasy queried the HSE’s continued failure to publish the Conal Devine report. He pointed out that the HSE had previously justified its non-publication by citing an ongoing garda investigation into the case. However this investigation has concluded and the DPP has ruled that there will be no criminal prosecutions arising, Deputy Deasy said.
He heavily criticised Tony O’Brien, Director General of the HSE, for not having read the Devine report himself and called for the immediate implementation of a new HSE policy to stop appointing former staff members to sensitive investigation into alleged failings in the health service. This new policy comes on foot of a recommendation by the PAC, after Deputy Deasy accused a ‘clique of HSE managers’ of sweeping the abuse claims ‘under the carpet for several years’.
“For the families of the children involved, there will be some sense of relief that policy change has resulted from the issues that have affected them. However I intend pursuing the non-publication of the relevant reports to date and the reasoning given and will be taking it up with the Department of Justice when they appear before the PAC next week.”