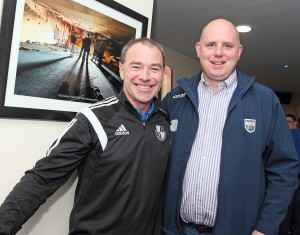 Tony Corcoran (St Saviour's GAA Club) pictured with Waterford Senior Football manager, Tom McGlinchey, at the official re-opening of the Saviour's Clubhouse; with a photo of the clubhouse's fire damaged interior (also photographed by Noel Browne) hanging behind them.

A new beginning for Ballybeg: that’s how Saint Saviour’s GAA Club Chairman Mark Corcoran characterised the official re-opening of their clubhouse and dressing rooms, less than nine months after an arson attack had devastated the premises.
“Well, we’re back, that’s the first thing I’ll say,” said Mark, when addressing invitees who saw at first had the superb project which main contractors Shercon completed in just a short few months.
“We received an incredible level of moral support since January 24th, firstly from the people of Ballybeg, the greater Ballybeg area, along with the city and county and you can take my word for it, as long as I’m Chairman of the Club, the kindness we were shown by so many will not be forgotten.”
The clubhouse, along with the nearby Youth Resource Centre, were attacked in the early hours of Saturday, January 24th, a morning “full of blue lights and broken dreams,” as Mark so eloquently put it to the gathering on Tuesday last.
Three days later, the shared St Saviour’s Boxing and Soccer Club facility was also attacked and fire damaged, the sad culmination of a week which left heads spinning both locally and further afield.
Cognisant that the club “had to knuckle down” at the start of the rebuilding process, Mark Corcoran added: “the people of Ballybeg saw this as an attack on them, on this community and the big plus for our club was how it galvanised the community. We came together and said enough is enough.”
The events of that week gave rise to the creation of the ‘Brick by Brick’ campaign, whose dedicated committee organised a host of successful and well-supported fundraisers held in Waterford in recent months.
Speaking at the clubhouse on Tuesday last, fundraising chair Willie Moore told The Munster Express: “It’s unreal. Nine months down the line, to have got to this point, with so much work done on the three buildings that were all badly damaged – they’re all up and running again and it took a lot out of so many people. And to see what the GAA Club has achieved here – the lads must have worked night and day in the last few months to put in place what’s here now. It’s a very proud day for Ballybeg – it’s a very proud day for this city.”
Willie added: “Mark is right – what happened here that week was an attack on the community. But look at the way people have responded. That morning, back in January, when we were stood at the gate here, smoke billowing here and up the road at the Youth Resource Centre, we were in a daze…
“But to see the way people right across the city and county, in Carrick-on-Suir, in Dublin, the way they got behind us, and the way The Munster Express and the local media got behind us and publicised our fundraising, like Mark said, we’re so thankful for all the support we received. And that goes for everyone who loves this estate. We just cannot say thanks often enough.”
Mark Corcoran is justly “proud of the finished job” at the Clubhouse and was heartened by the support offered to the estate’s three clubs.
“We wanted to modernise the facility, and I think we’ve achieved that, so what you see here tonight is just part one. We’re hoping to build on, possibly in the next couple of months, is a new gym and dressing rooms, so we’ve a lot of plans still to follow through on.”
Reflecting on that dreadful week in January, Mark said the further arson attack left “everyone out on their feet…we were just totally stunned”.
He added: “Why someone would want to attack organisations doing good in the community stunned us and the wider area, and to see so many people, not living in the area, coming along to the public meeting that was held to discuss the way ahead, that to me told me something good was going to come out of all of this. And here we are. We’re still here, and this community has never been so tight. It’s a very proud time to be from Ballybeg and being involved in this community.”
The official opening featured a nine-minute film which traced the Clubhouse’s regeneration, from an incinerated hollow that January morning to the superbly finished facility, which has already hosted birthday parties and other family-related events.
City & County Mayor John Cummins and Waterford GAA County Board Chairman Paddy Joe Ryan both addressed the gathering, and saluted the resilience and character of both the club and community in the wake of such a devastating setback.
Also in attendance at Tuesday last’s official re-opening was Senator David Cullinane, along with Councillors Cha O’Neill, Jason Murphy, John O’Leary, Adam Wyse and John Hearne, as well as members of both the Waterford GAA Executive and the Eastern Board.