"City's food poverty is not in Ballybeg" 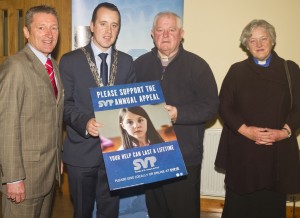 The emergence of food poverty in Waterford city, among those who have been termed the ‘new poor’ in recent years, has not come from areas that have been, rightly or wrongly, associated with social deprivation.
“A lot of the people on your books once came to the Vincent de Paul as donors – now they’re coming to you as recipients,” said Dean of ChristChurch Maria Jansson at the launch of the Society’s annual appeal at the Sacred Heart Centre on Thursday last.
“I’ve been in the ‘people trade’ for 40 years. I’ve worked in Finglas, Ballymun and Sean McDermott Street, I’ve worked in homeless hostels, I’ve worked and I’ve had a varied history, and I’d never met food poverty until I met it in Waterford – and I haven’t met it in Ballybeg.”
Dean Jansson added: “I’ve met it on the middle class side of town. I’ve met it in households where two people have both lost their jobs. There’s no money. There are no entitlements. “They’re the ‘new poor’, a phrase I don’t like because it’s patronising, but people are now so challenged…trying to keep the show going for their kids, paying their debts off in bits…these were the people who once gave generously (to the VdeP), now they’re its recipients and it’s a very sensitive, hurting area in Waterford, I think.”
Urging support for the appeal, which runs from this Thursday, November 26th, through to Sunday next, the 29th, Waterford Vincent de Paul President Michael Curran said the VdeP’s group of volunteers are increasingly witnessing “at first hand utter helplessness among families”.
Also speaking on Thursday last, he added: “Less than a week ago, in torrential rain, I visited a family of nine who are trying to live in a small caravan without even the basic amenities. This is not what we would like to expect in the 21st century, but poverty knows no social barriers.”
During 2014, the Society provided €580,000 in assistance to families in need in Waterford, an increase of €100,000 on the 2013 figure (with the Lions Club donating a further €70,000 to the VdeP).
In 2013 and 2014 combined, Waterford Saint Vincent de Paul has spent over €1m assisting families in need across the city and county, underlining the significance of the service it provides.
Michael Curran continued: “Last year, we had an increase of 15.9 per cent in requests for assistance, which represents an 11 per cent increase of households in the Waterford area seeking assistance. This frightening statistic means that one in nine households in Waterford required assistance from the Saint Vincent de Paul…and based on our figures for the year, that one in nine figure still applies when it comes to 2015.”
As previously reported, with church gate collection monies falling, the Society has opened four shops in the city, with another soon to open in Tramore, as a means of generating additional funds.
But Michael Curran hopes the people of Waterford will once again give generously this week, and welcomed City & County Mayor John Cummins’ news that the VdeP will be among the beneficiaries of the Mayor’s Ball.
“We’re delighted to have been chosen as one of the beneficiaries of the Mayor’s Ball, and I’d like to thank the Mayor for considering us worthy of such support,” he said.
“The people of Waterford have continued to support us, regardless of the prevalent economic climate in the city…the theme of this year’s appeal is ‘Your Help Can Last A Lifetime’. It can take just one small problem to tip a family into crisis. We want to emphasise that we are here primarily to help people through a hard time, and sometimes that is sufficient to ensure that they don’t slip into long-term poverty. We know only too well that a little help at the right time can change everything for someone in crisis.”
Michael Curran concluded: “These remain, without doubt, challenging times, but with your continued help, we can meet that challenge and continue to try and meet the demands of those in need in our city.”