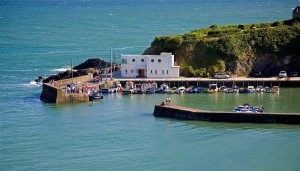 WATERFORD’S Copper Coast Geopark has become a UNESCO Global Geopark, and now has the same status as a World Heritage Site.
In 1972 UNESCO signed the World Heritage Convention which paved the way for the establishment of a list of World Heritage Sites.
A vote at the General Conference in Paris last week created a new site designation, the UNESCO Global Geopark.
There has been a broad welcome across Waterford to the awarding of this designation which recognises the importance of geological heritage across the world.
“This remarkable achievement would not have been possible without the support of the communities within our boundary and the dedicated work of a small number of individuals,” said Copper Coast Geopark Chairman Mike Sweeney.
“We are a charity and a largely voluntary organisation and are most grateful for the help of FAS and TUS colleagues who have helped in recent years.”
The Copper Coast Geopark covers an area of 90 sq. km. including the villages of Dunhill, Fenor, Boatstrand, Annestown, Bunmahon, Stradbally and Kill.
The Geopark has made significant progress since becoming the seventh Geopark in the world in 2001.
Working with other Geoparks within the Geopark Network meant that the Copper Coast could participate in a number of InterReg projects (2004-14) which allowed a deepening understanding of the area’s rich geological and industrial past and enrich this with the experience of others throughout Europe.
Funds also allowed for the purchase and conservation of a number of key buildings notably the engine house at Tankardstown and the old church at Bunmahon.
Funding has been provided by a grant from Leader and loan support from Clan Credo to refurbish and extend the former church at Bunmahon which now acts as the Copper Coast Geopark’s headquarters and as a Visitor Centre housing a café, a craft shop and exhibition dedicated to the area’s rich cultural and geological heritage.
Mr Sweeney said that the purpose of a Geopark is to explore, develop and celebrate the links between geological heritage and all other aspects of the areas natural, cultural and intangible heritages.
“Geoparks are about reconnecting human society at all levels to the planet we call home and to celebrate how our planet’s history has shaped every aspect of our lives and societies,” he said.
“Geoparks bring benefit to the regional economy, primarily through the promotion of tourism, but they also have an important role in education and working with communities to build pride of place.”
Ireland has three World Heritage sites Newgrange, Skellig Michael and the Giant’s Causeway, and now it has three UNESCO Global Geoparks: The Copper Coast Geopark, the oldest Geopark in Ireland, Burren and Cliffs of Moher Geopark and Marble Arch Caves Global Geopark.
“Our journey would not have been possible without the support of the Geological Survey of Ireland and the Council,” explained Mr Sweeney.
Commenting on the UNESCO designation, Mayor of Waterford City and County Council Cllr John Cummins, said that it was a major statement of the value of the Copper Coast from both a geological and tourism perspective.
“This is very much a statement about the uniqueness of this wonderful area and landscape,” he said.
“The Copper Coast Geopark community and its leaders are deserving of both our congratulations for existing achievements and our support in developing its future potential.”
Meanwhile, Chief Executive of Waterford City & County Council Michael Walsh, stressed that the designation was a total vindication of the efforts of the local community over the years to achieve recognition and local economic gain from the unique character of the area.
During the winter months the Copper Coast Geopark Visiotr Centre reverts to community use but can also be used for private events including civil ceremonies.
Their next event is the eagerly anticipated Christmas Fair on December 5th and 6th.
“Please come along it will give the opportunity to learn a little more about us and support local craftspeople who will have a number of stalls,” said Mr Sweeney.
“We have decided that any income the Centre makes from this event will be donated to our colleagues in Lesvos Geopark to help with the humanitarian crisis swamping that small island.”
The Munster Express partnered with the Copper Coast Geopark as part of this year’s ‘Get Involved’ which is a sustainable communities initiative developed by 51 local newspapers throughout Ireland and is a way for local communities all over Ireland to work together to improve their own lives, create local jobs, and protect the environment.
All at The Munster Express wish to congratulate all involved with the Copper Coast Geopark on their remarkable achievement!