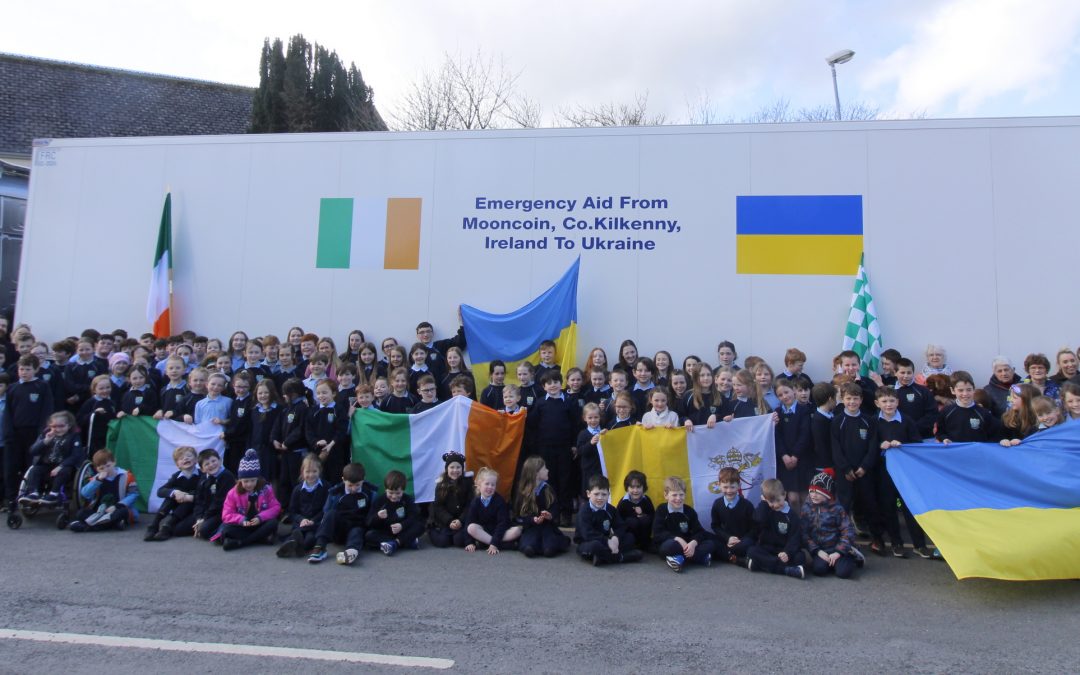 The Chief Executive of Waterford City and County Council, Michael Walsh has vowed that the local authority will play its part in dealing with the Ukrainian crisis and no-one will be left without a roof over their head.

Responding to questions raised by Councillor Jason Murphy (FF), Mr. Walsh assured members that Waterford city and county council would not be found wanting.  Cllr. Murphy said that the council had always been to the fore of addressing very serious issues –  “whether it be bad weather or covid and I would hope that we would show the same energy in addressing the Ukrainian crisis.”

Pupils from Mooncoin pictured with Fr. Martin Tobin P.P. Mooncoin, Pat Croke International Transport Haulier who will drive to Ukraine and parishioners that helped to donate a full container load of Humanitarian Aid for Ukraine. Pat will drive to Ukraine with a 40 foot container full of Humanitarian Aid, including over €10,000 worth of Medical supplies, also lots pallets of clothes (new and used), graded into age groups, food, drinks, water and toiletries and essential items. Photo: Joe Cashin

Cllr. Murphy added that he thought the council was the best instrument for delivering emergency accommodation. “We are all getting a lot of calls from people offering accommodation, but we need a central point. How are we going to manage this? I would hope we would have a special centre with people who speak Ukrainian, psychologists, doctors, these people are suffering great trauma and primarily we are talking about women and children. We need people who can deal with those who are in severe distress. We can’t even imagine the kind of distress they have suffered.  It’s one of the worst things we’ve seen since World War Two.”

Director of Housing Ivan Grimes explained that the initial response was being co-ordinated under the Department of Children Equality, Disability and Integration. The Department, he said, had requested the Red Cross to deal with the register of pledges of accommodation. “As of now there is no specific role envisaged for local authorities but that may change. We have been receiving approaches from individuals and people with larger accommodation and we have been directing them to the Red Cross website.” 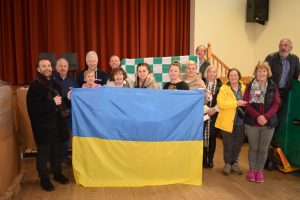 A group of Mooncoin supporters and helpers pictured with some Ukranian friends, as the container to Ukraine was being loaded on Saturday last. Photo: Joe Cashin

The Chief Executive said he had been party to discussions at national level and it was inevitable that councils would  have a formal role in the situation. “At moment it’s the Red Cross that are handling the situation but as the flow gets bigger, we are almost certainly going to have a significant role. We will be engaging with the community and reinstituting the Community Forum scenario that was there for covid. But that’s all a matter of discussion and will firmed up in the next few days at national level. In the interim Ivan and the housing team are working away on it. We are not going to leave anybody without a roof over the head. We will give it the energy it requires and we share the sentiments of the council, there is no question about that. “