The Deise Men’s Shed was officially opened at the Six Cross Roads by City & County Mayor Pat Nugent on Thursday last, with Chairperson Willie Moore full of praise for all who helped bring the idea to fruition.
“To think it all began with a call to the Community Centre from Jim Frisby a few short months ago,” said Willie before a packed gathering in the ground floor workshop area of the Men’s Shed. “And here we are now, in a fantastic, fitted facility. It’s just incredible.” 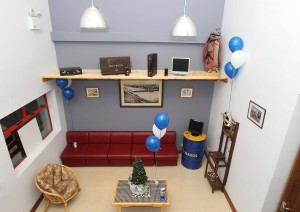 The reception area at the Deise Men's Shed.

Addressing the gathering, Willie admitted that when he first heard from Jim that he was just recovering from a serious illness. “I thought I didn’t have the energy for it, but something just clicked inside me and I told them down in the Community Centre that I’d be down in a few minutes, so we met, went into the kitchen, had a cup of tea and he explained to me about the Men’s Shed. Now I’d spoken to Jason (Murphy, the local Councillor) about it the year previously, the idea of setting one up, so I’d made a phonecall to Jason and the following Monday morning up in Costa Coffee in Lisduggan, we met, along with Jim and Rebecca (Beegan of the Waterford Area Partnership) and we decided we’d take on the challenge and how far we could bring it, and you only have to look around you to see how far we’ve come.”

Jim Frisby then began the search for a suitable premises, and he went for a look around the Six Cross Roads Business Park, and this was where he first met Martin O’Shea of Waterford Industrial Properties.
Said Willie: “Martin O’Shea, along with Mattie, got stuck into it straight away and within two to three days, we met Martin at the Ramada, along with Reggie Condon, and off we went, down to Dungarvan, to check out the Men’s Shed they had up and running down there. After that, we went to Carlow for a look at what they had there – another nice spin – and we met the lads there and we’d learned a lot from both those trips. It just hammered it home to us how much we wanted to open a Men’s Shed in Waterford City so lo and behold around June, I got a phonecall to go down to the Six Cross Roads, and I was told to go to Unit 19E and Reggie, myself and Jim were down outside the front door here and out comes the boss man, Martin and he said ‘that’s yours now, ye can have it’, it was as simple as that, and we’ve been working away on it ever since, we had to get some electrical work done in September, and then we had funding to take on, and we got great help from Noel Frisby, who gave us the green light to do a collection at the Shopping Centre in Lisduggan, and we rang the Bishop too, so that we could do a Church collection, and in the space of one weekend, we raised €1400, and that allowed us to get the electrical work done. And then we got a donation from Stan Kiely and tools from Ray Quinlan, and the help we have gotten from so many people to get everything up to scratch here has been incredible.” 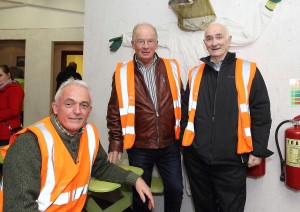 The two floor facility comes with a reception area, a woodwork and metalwork area, a kitchen, a computer room, an arts and crafts area, a ‘Bee Room’ and a relaxation room. And it’s an absolute credit to all concerned, in particular to Willie Moore, whom Cllr Jason Murphy (FF) rightly lauded at the opening as “a true community champion”.