Eleven years on from the last great Waterford/South Kilkenny boundary debate, the findings of a survey undertaken by Inistioge-based Market Dynamics back in 2005 still make for interesting reading.
The report, which was completed by company Managing Director John Gilsenan, saw 150 householders surveyed “in the area of South Kilkenny that Waterford City Council has applied to include within its city boundary”. 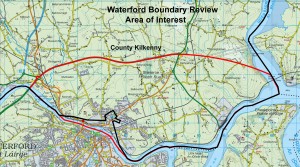 The area subject to the Waterford/South Kilkenny Boundary Review, marked in red.

According to the most relevant Census at the time (2002), there were 1649 households in the area, taking in a population of 5095.
The sample number of 150 composed 67 people originally from Waterford, 50 Kilkenny natives and 33 from elsewhere, with the report stressing that “no attempt was made to interview a specific quota of people from either Kilkenny or Waterford. The distribution is based on the proportion we found in the random sample”.
Broken down even further, the respondents were living in the following estates/townlands:
Abbeylands (38), Ballynamona (4), Ballyrobin (12), Belmount (3), Cloone (1), Gorteens (1), Kilmurry (12), Mount Sion (5), Mullinabro (10), Newrath (8), Newtown (4), Rathculliheen (6), Rockshire (11) and Slieverue (16). “A further 19 interviewees claimed not to know their townland,” the report stated.
The survey’s commentary read: “Contrary to expectations, Market Dynamics’ survey of a sample of householders in the area of South Kilkenny that Waterford City Council is aiming to take over, suggests that the majority are in favour of the plan.
“Though views on the matter are polarised according to whether respondents are from Kilkenny or Waterford, nonetheless, two major findings favour the Waterford case. Firstly, due to migration from the city, our survey suggests that the majority of residents in the area are actually from Waterford. This makes them far better disposed to the plan than the residents who come from Kilkenny, or those who come from neither county.”
“Secondly,” and a particularly interesting point worth noting in the context of the ongoing debate,” a significant proportion of those who are from Kilkenny, actually support the plan. This is mostly because they are disenchanted by service provision by the Kilkenny authorities.”
The survey’s executive summary revealed that 49 per cent of respondents thought “it would be a good idea if Waterford City Council took over responsibility for the area while 33 per cent believe it would be a bad thing. A further 18 per cent claimed not to know or had no opinion on the matter”.
Not surprisingly, “a total of 69 per cent of those who are from Waterford are very supportive of the plan while 30 per cent of those from Kilkenny think it would be a good thing. Fifty-six per cent of Kilkenny people oppose it compared to only 12 per cent of Waterford people. In purely numerical terms, the proportion of people from Waterford who support the idea is higher than the proportion of people from Kilkenny who oppose it. Among those from neither county, there is an even split of views with 39 per cent supporting the plan and 39 per cent against, with 21 per cent claiming not to know or have an opinion.”
Those respondents in favour of Waterford City Council’s proposal “gave as their primary reason the fact that Waterford city was so close (49 per cent). A total of 28 per cent said they thought services would be better under Waterford’s control, while the same proportion claimed the area had been neglected by Kilkenny.
As a proportion, more people from Kilkenny than Waterford claimed that the authorities in Kilkenny had neglected the area. This was the primary reason given by those respondents from Kilkenny who favour the Waterford plan. Those who oppose the plan gave as their primary reason the fact that they were from Kilkenny (53 per cent of total and 89 per cent of Kilkenny people) and this meant a lot to them. A total of 10 per cent were concerned about a possible increase in social housing.”
Interestingly, at the November meeting of the Piltown Electoral District, plans to de-zone significant land banks in the greater Ferrybank area were discussed as part of the revised Local Area Plan, a pre-draft of which is due to be published by Kilkenny County Council in the New Year.