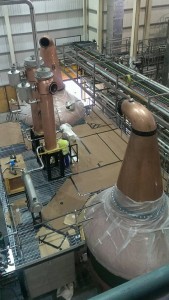 Trial distilling began at the Waterford Distillery on Grattan Quay on Saturday last, coinciding with the first anniversary of the facility’s acquisition by Renegade Spirits Ltd.
Speaking to The Munster Express, proprietor Mark Reynier said he hopes that a million litres of pure alcohol will be distilled on the premises during 2016, spoke of how enthused he has been with the support he’s received since arriving in Waterford a year ago.
“It’s intriguing how often I’ve been asked about my impressions of Waterford since I first arrived here – I can’t quite explain why I’ve been asked that particular question so regularly but Waterford has a great deal going for it, it really has,” he said.
“This is a fine city – I love it a lot. VLM have a great service in place at the airport and that increased accessibility is jolly good. The railway to Dublin works brilliantly – I quite often get the Aer Lingus flight to Edinburgh and of course there’s the excellent motorway link to Dublin now. I mean, the Quay itself is incredibly impressive; to me it’s got the essence of a Cornish port, a trading city in a semi-agricultural area on the banks of a tidal river, all of which makes Waterford very special – and there’s a great sense of heritage here. And I really couldn’t be happier to have made the decision to come here. It’s a place I’ve become quickly enamoured with.”
Dedicated warehousing is being “developed nearby”, said Mr Reynier (“we haven’t got enough room down here”), to house the barrels of Waterford-produced whiskey that will be produced here in due course.
“Where you mature whiskey is very important, because whiskey absorbs flavour from where it’s sitting, where it matures, so a good location is vital,” he added.
“And we will be taking advantage of the Atlantic breezes so the warehouse is going to be built in a fairly exposed location.”
With 46 farmers from the midlands and the south east now supplying the Distillery with barley and with the spirit and wash pot stills now in place, Mark Reynier is justly proud of the progress that’s been made over the past year.
“Thanks to the relationships we’ve established with farmers, we now have 100,000 litres per farm – that’s one week’s distillation – which is, in fact, two brews per farm,” he explained.
“Two brews equals one fermentation vessel, one fermentation vessel equals four fills of the spirit still, which produces spirit at roughly 25 per cent alcohol and those four together will produce two to fill one spirit still. So it’s all about balancing the volumes.
“And those two (pot) stills will enable us to produce a million litres of pure alcohol a year, which is roughly the equivalent of 250,000 cases. Now we’re not going to use all of that in one go; some of that will be left to mature for longer but that gives you, I hope, an easier means of understanding how we’ll operate, all of which will lead to one million litres of pure alcohol in barrels by December of next year.”
Mr Reynier, cognisant of the “hidden gem” the old brewery building on the site represents, will turn his attention to the original building as a “brewing heritage site” attraction once his whiskey is on the market.
“It’s been there since at least 1792, it’s a lovely place to visit and we’d love to be able to open it up to the people of the city and those visiting Waterford. One of our shareholders is a local and would love to see it opened up, and it’s a beautiful building…and I suspect it would take at least half a million (Euro) to bring it up to an accessible condition. But we do intend to get to it in time.”