Employers must listen to Waterford's disabled 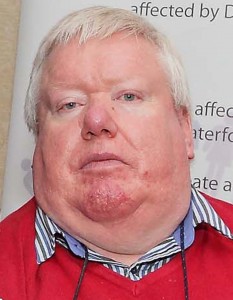 WDN Chair John McDonald, who is hoping for positive change in the labour market for people with disabilities.

The Chairman of the Waterford Disability Network (WDN) has challenged Waterford Chamber, Waterford Business Group and IBEC to listen ‘with both ears’ to people with disabilities who wish to enter the labour market.
Speaking to The Munster Express following the WDN Employability Conference at Dooley’s Hotel, John McDonald said he was disappointed that several key business stakeholders had not availed of their invitations to attend the event.
“Well, it would have made the message we want to get across to as many people a little easier to communicate to employers in Waterford if a few more of them had showed up; we sent out 140 invitations for our conference so we tried to cover every base we could think of,” he said.
“So while I am a little disappointed that we didn’t see a few more influential business people and decision makers at our conference, I was very pleased with the enthusiasm of the delegates who did make the effort to attend, and to hear several Waterford employers – Ardkeen Stores, Costa Coffee and Toymaster to name but three – talk about the positive experiences they’ve had in adding people with disabilities to their payroll, shows that, bit by bit, we’re moving closer to equality.
“There’s a long road ahead of us yet, but I’m encouraged by the proactive stance that several employers in Waterford have adopted; what we need now is a few more to follow suit, and let’s hope that’ll prove the case over the next year to 18 months.”
Mr McDonald added: “Look, and this has always been the case, groups such as ours are the ones that are going to have to keep driving the agenda on this until we get enough employers on board – and politicians for that matter – to see that this is as much about equality as it is about employment.”
John McDonald said the conference was “an eye-opener” for those in attendance who might be as au fait with issues facing people with disabilities as he has been throughout his life.
“There’s a lot of assistance there for employers who want to get on board with this; they’ve just got to make themselves aware of the detail,” he said.
“Until such time as they do that, then the likes of the Waterford Disability Network and the Disability Federation of Ireland have got to keep banging this particular drum. That’s our job, that’s what we have to do.”
Mr McDonald said that WDN would be making contact with the city’s major business representative groups to relay what had been discussed at the October 20th conference.
On the wider disability issue, Mr McDonald believes there are “thousands more” citizens, not categorised with a disability, who feel under-represented in Ireland today.
“Take people with kidney failure or heart disease,” he added.
“By and large, none of these people are included in the 600,000 figure that the last Census stated accounted for all the people in the State who are living with a disability. But as far as I’m concerned, if you have kidney disease or heart failure, that’s a disability – a life altering complication that once you’ve been diagnosed with, alters the way you live the rest of your life from the day it’s diagnosed.
“And if people with such diseases and conditions came together with those of us who are officially categorised as disabled, you’re talking about a massive number of people, a sizeable proportion of the voting population, and we could make a big difference come election time. I’m a big fan of strength in numbers, and forming the WDN was part of that effort. And I’ll keep plugging away, I can assure you.”