Giving hope to our most vulnerable 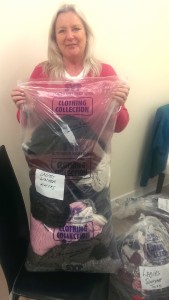 The extent of the services provided by Waterford’s Saint Vincent de Paul, I must confess, stunned me when I was taken around the city on Wednesday last by Area President Michael Curran.
At the end of an insightful afternoon, during which time The Munster Express had spoken to over a dozen ‘VdeP’ representatives, I’d gained a glimpse into the vital work the Society has been committed to in Waterford for over 150 years.
And it’s work which, given the trying economic and social circumstances facing many households and individuals in Waterford and across the South East region (which also includes Kilkenny, Wexford, Carlow and Laois), is as necessary now as it has ever been.
With a view to future challenges and endeavours, the Society is currently in the midst of expanding its warehousing capacity following its move into the Six Cross Roads Business Park.
With construction of meeting and reception rooms over two floors ongoing, Warehouse Manager Mary Deegan said: “this is the first facility of its kind in terms of the regional network. And this centre will raise money through the recycling of clothes and also to supply all the other shops in the region with stock for their shops – clothes, books, household goods and so on.”
Given that church gate/envelope collections do not bring in the sort of money that once they did, the development of the Vincent’s shop network in the city (of which there are four) and the clothes recycling system have taken on additional significance.
“The shops take in bags and there are various churches in the diocese where we hand out SVP bags over the course of the year, and these bags contain a leaflet, informing people of what we do, which we hand out as people leave mass, and that’s how we gather stock, and this is now going to be our hub, here at the Six Cross Roads.”
And they have gathered an incredible level of stock, as I saw with my own two eyes on Wednesday last, with clothes divided into seasonal wear.
Surplus stock from the local shops is stored at the new warehouse, and everything, as Mary stated, “is sorted twice as we have to make sure that we don’t let anything slip through that can be sold in the shops…and is broken down into the various categories of clothing, by gender, size and season and each category has its own space out there.
“So we can get calls from throughout the region and, logistically, when we’re sending stock to Enniscorthy and Wexford, for example, then we’ll make sure at least two shops are serviced during a delivery.”
The space, now at Mary’s disposal “is incredible – I don’t know myself now with all the space I have. It also means we can have more volunteers and more people working together, and that in turn means we can get stock back into shops much more quickly than was previously the case. And we have about 2500 bags to sort at the moment, but you’d be amazed at how quickly you’d get through them; I’d get through between 20 and 30 bags myself.”
Mary Deegan added: “I grew up conscious of the Vincent de Paul, like so many of our volunteers have, and it’s a wonderful organisation to be part of. To help people who in many cases have nothing, and to know the difference such work is making to peoples’ lives, is incredibly validating. And there’s a great sense of reward in such work. It’s nice to give back a bit.”