IFA president's beef with WHO report 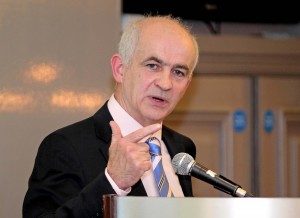 IFA President Eddie Downey joined in the chorus of criticism which greeted last week’s World Health Organisation (WHO) report which categorised processed and red meat in the same cancer-causing bracket as asbestos and tobacco.
Addressing guests at Waterford IFA’s 60th anniversary banquet in Lawlor’s Hotel on Thursday last, Eddie Downey, who ordered beef for dinner that evening, stated: “the message is the same as it was yesterday – eat everything in moderation, continue as you were, eat healthily and get in some regular exercise along the way.”
On Monday of last week, the WHO’s International Agency for Research on Cancer issued a report which adjudicated that processed meat (rashers and sausages), along with red meat, were probably carcinogenic.
Speaking to The Irish Times on Friday last, WHO spokesperson Gregory Härtl suggested that the report’s intention had been “misinterpreted”.
He added: “We’re not saying stop eating processed meats altogether. Do not cut out meats completely as it has nutrients. But we do not want to do anything to excess. Research indicates reducing your consumption of processed meats can reduce the risk of colorectal cancer.”
Meanwhile, Eddie Downey said the Chinese Government’s decision to end the one child per family policy, also announced last week, could have serious and positive implications for the Irish dairy sector.
“Johnson & Johnson – and some of you might be wondering why I’m mentioning Johnson & Johnson tonight – they produce baby products, and today their share price grew, and it grew because the Chinese announced that they have moved from a one child family to a two child family policy,” he told the Lawlor’s audience.
“Baby products will be in demand. Glanbia has built a plant down the road from here (in Belview) which produces power for baby formula, and Ireland alone produces over 20 per cent of the world’s baby formula, so there’s an opportunity on the horizon, we need to seize that and ensure we don’t lose sight of such an opportunity because of the noise that’s out there at the moment when it comes to the global economy.”
Referring to the Government’s support for farmers, Minister of State Paudie Coffey said: “The (2016) budget introduces a tax credit of €5,000 per annum for five years, for farmers who transfer their land to successors over a period of time. This will make it much easier for farms to be passed from one generation to the next, securing them for the future of the family farm.
“The renewal of four existing tax measures in the Budget includes two that are specifically targeted at young farmers; the 100 per cent Stock Relief on Income Tax for Certain Young Trained Farmers, and the Stamp Duty Exemption on Transfers of Land to Young Trained Farmers. The other two measures for general farmers being extended are the 25 per cent General Stock Relief on Income Tax, and the 50 per cent Stock Relief on Income Tax for Registered Farm Partnerships. All of these measures are being extended for three years.”
He added: “We want to see a strong Agriculture sector that continues to play a growing and important role in the Irish economy. I will continue to work with farming representatives across Waterford to ensure that the sector continues to grow and reach its full potential.”
Fine Gael was strongly represented at last Thursday’s banquet, as evidenced by the respective attendances of Minister Coffey, Deputy John Deasy, Seanad Leader Maurice Cummins, City & County Mayor John Cummins, along with Councillors Seanie Power and Declan Doocey.
Eddie Downey added: “Yes, it is a fragile recovery but you can see cranes up there; and up until recently, pretty much the only cranes you saw were involved in agricultural construction…
“But what needs to be remembered (by all politicians) is the part that agriculture and the food industry has played, over the last number of years, since 2008, in making sure that this economy has recovered.”