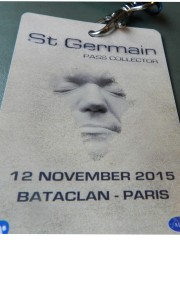 A group of four young men from Tramore were in the Bataclan music hall in Paris just 24 hours before the terrorist attack which claimed 89 lives at the same venue.
This newspaper spoke with Aodhgan Hendry of Tramore, who was just back from Paris, happy to be home but still shocked from events – and what might have been.
Aodhgan and his friends, Darragh McDonald of Soul Dance Records, Georges St., Waterford, Jason Murphy, Railway Square Tramore, who works as a mechanic, and David Hoban of Tramore Heights, a trainee electrician, travelled to see jazz rock group St Germain performing, just a night before the unspeakable carnage began.
Security was tight at the Bataclan, however the female manager saw the complication over the tickets (they’d booked their tickets online) and the box office issued them a special pass.
Aodhgan remembered her as being very helpful and said he really hopes she survived the massacre – and he feared at the weekend that she may be dead or injured.
They had tickets for the stalls which was standing room only and the following night most of the terrorist shootings took place there, who killed 89 and injured scores more at the venue.
The following night, the quarter decided to have a night in, having a meal while taking in the France-Germany international soccer match on television. Halfway through the game a note flashed up on the screen about the attacks at the stadium.
“We were completely shocked”, said Aodhgan, when they saw further attacks in the area, where they had been and then learned that the Bataclan was attacked.
“It was like getting a feeling that we had been given a second lease of life. We realised how lucky and fortunate we but there was still a deep sense of shock about it all.”
They quickly received calls and texts from home and put up a safe notice status on Facebook to assure all that they were well and had stayed in that night, a huge relief to their parents.
After the attacks, they went for a short walk, and saw hordes of police going up and down the Champs Elysees.
“Police were walking back to back patrolling with guns at the ready,” said Aodhgan, “Police vans and cars travelled up and down the street in threes. Side doors were open with guns at ready”, he added.
The following day Aodhgan noted how sombre the city was and how a “depression had hit the city…it was “a dismal day with heavy security”.
Aodhgan travelled back to Dublin on Saturday night. There was no problem getting a bus from Porte Maillot to Beauvais Airport, while armed police were at toll road checkpoints.
Back on the plane, the Irish passengers all spoke about their experience – though none had actually witnessed any of the shootings. They were the fortunate ones.
He headed home to Tramore where we met him and his father Joe, who was happy to see his son after such an ordeal.
He will remember this weekend for the rest of his life, for the tragedy he avoided. Books of condolence are open in both City Hall and The Munster Express offices.
* Waterford-St Herblain Town Twinning Committee Chair Davy Walsh said he was “shocked, saddened and repulsed by the attacks on the ordinary people of France which unfolded on Friday night”. Mr Walsh added: “Our thoughts and prayers are with the people of France during this troubled time. We wish to extend the hand of friendship and solidarity and assure them of our continued support. I have conveyed our sympathies to the people of St. Herblain and Nantes.”