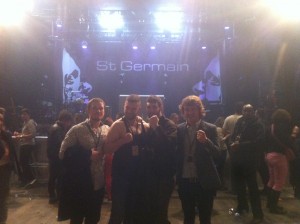 Facebook picture posted from Bataclan Paris prior to St. Germain the day before fatal attack With Tramore youths

A group of 4 young men from Tramore, County Waterford were in the Paris Bataclan music hall the day before the Paris attacks would take place that claimed up to 89 lives at that venue alone.
We spoke with Aodhgan Hendry of Tramore, who was just back from Paris, happy to be home, but still shocked from events and what might have been. On the evening of the attacks, they had a night in having meal, watching football, then learned of the tragedy.
The night before they watched St. Germain, a jazz rock group, performing and the 4 young men had travelled to Paris specially for the gig. They had booked, the tickets on line and arrived just after 8.30pm on the Thursday.
The box office had just closed so was difficult getting into Bataclan, Aodhgan Hendry of Tramore and his group of Darragh McDonald, of Soul Dance Records, Georges St., Waterford, Jason Murphy, Railway Square Tramore, who works as a mechanic and David Hoban of Tramore Heights, trainee electrician were a little surprised.
Security was tight, however the female manager, saw the complication over the tickets and box office gave them a special pass. She said she knew and liked Ireland, as they explained they travelled over for it and gave them special passes. Aodhgan, spoke to the Munster Express and really hope she survived the massacre. He feared at the weekend that she maybe dead or injured, he remembered her as really helpful.
They had tickets for the stalls which was standing room only and the following night most of the terrorists shootings took place there. Upstairs was seating and was less affected by the shootings,89 were killed in Bataclain on the Friday and scores injured.
The Bataclan venue itself holds 1400 people and was fairly full, it dates back to the 1860s and has been a cinema in the past, but is now a top music venue. The atmosphere on Thursday was great with many nationalities at the gig in the 11th arrondissement of Paris. The Waterford lads had taken a train there to Rue Voltaire ës Oberkampf station, to get to Bataclan Theatre, which Aodhgan said was like the Olympia in Dublin. Bar staff friendly and Aodhgan really felt for them and hope they survived the attacks.
After a great gig watching St. Germain playing, Rose Rouge and So Flute, they had a drink in a nearby where some locals talked to them about U2 and Rory Gallagher.
They remember it as a great night and went back to where they stayed at the Champs Elysees.
The following night, they decided to have a night dining in at the apartment booked online, buying food in Monoprix and watched the French German game with the sound turned down, halfway through the game, a note came up on the screen of the attacks at the stadium. They had planned to go to Irish pub Corcorans in St. Michel and watch the Bosnia game, but enjoyed their comforts and a glass of wine.
They were completely shocked, said Aodhgan, when they saw further attacks in the area, where they had been and then saw that the Bataclan was attacked. It was a feeling of getting a second lease of life and how lucky and fortunate they were, but there was still a sense of shock.
They were getting calls and texts from home and put up a safe notice status on Facebook to assure all that they were well and actually stayed in that night. They had thought of going out later but so much was closed down, this was much to the relief of their parents.
They did go for a short walk around the area, after the attacks. Police were going up and down the Champs Elysees, they said “Police were walking back to back patrolling with guns at the ready” said Aodhgan, Police vans and cars travelled up and down the street in threes. “Side doors were open with guns at ready”, he added, in what was strange situation.
It was scary and shocking to see in a big city and resembled, a war like approach. Next day, the city
was sombre, he could feel that a depression had hit the city, very few on metro, police patrolled stations and many armed police at the Champs Elysees. They did notice on the Friday morning, prior to events armed police at the Eiffel Tower and Montmartheís Sacre Coeur Church, the main tourist areas also had an armed police and army presence.
On Saturday, there was a prevailing sense of a dismal day with heavy security. They went down to St. Michel, where more people were out and about, as the day progressed more people were on the move.
Many tourist shops were closed on Champs Elysees, but ordinary shops were open for locals, elsewhere.
Aodhgan travelled back on Saturday night to Dublin. There was no problem getting a bus from Porte Maillot to Beauvais Airport, armed police were at toll road checkpoints.
At Beauvais airport, where Ryanair operate, again, much armed presence, but no problems.
Back on the plane, the Irish passengers all spoke about their experience, none had actually witnessed any of the shootings.
They were all glad to be safe, going home and thanking themselves in getting through it.
Aodhganís friends stayed on a few extra days. He was heading home to Tramore where we met him and his Dad Joe, who was happy to see his son after such an ordeal .
He would then go onto Cardiff and University of Wales, where he studies sound for film and TV.
He will remember this weekend for the rest of his life, for the tragedy he avoided and also the good event music and good people at the Bataclan.