SIGNIFICANT traffic changes planned for Waterford City have been put on hold until the New Year.
Waterford City & County Council did not implement its proposed one-way system in the Railway Square/Manor Street/Bath Street area on Friday December 15th as planned.
These changes will now commence on January 11th 2018.
Traffic management will be in place at the Bath Street – Manor Street – College Street Junction on Wednesday, January 10th 10am and throughout Wednesday night.
The existing traffic signals will have to be turned off to facilitate the installation of new traffic signals.
The one way system around the Link Road will then come into effect on the Thursday morning, 11th January.
The traffic management arrangement which is currently in place has caused some controversy among motorists and local Councillors.
At the December Metropolitan District meeting of Waterford City & County Council, Cllr John Cummins (FG) sought an update on the traffic management measures which he said are impacting on the Manor, Poleberry, Bath Street and Bunkers Hill areas.
Cllr Cummins, who said the new traffic management measures are creating the “worst of both worlds”, believes minor changes could be made which would improve the situation.
He also reiterated his concerns over road safety on Convent Hill which he says he has been highlighting for the past six months but to no avail. 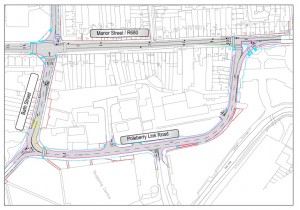 Cllr Cummins described the current situation as “crazy” and “very, very dangerous”, calling for issues in the area to be addressed as soon as possible.
Meanwhile, at the December plenary meeting of Waterford City & County Council, Cllr Cha O’Neill (Ind) said Councillors had been “getting it in the neck”.
While he said he was “all in favour” of progress in the city, he had expressed reservations over implementing changes during one of busiest weekends of the year and said he hopes the implementation of changes will go smoothly in the New Year.
In a statement, Waterford City & County Council have said the changes in the Manor Street area are part of the Waterford City Centre Urban Renewal Scheme initiated in 2015, with many of the changes supporting the policy objectives of the Waterford City Development Plan (2013-2019), including the ‘provision of a citywide cycle network to link all areas of the city to each other via main routes’.
“We ask for your patience during this transition,” the statement said.
“There is an acknowledged delay with the traffic signalling/sequencing at the Bath Street, Manor Street junction and this will be alleviated as the new one-way system at these streets begins on January 10th 2018. This should improve some of the congestion in that immediate area. It is also planned to upgrade the College Street/Hennessy’s Road areas to make them fit for the anticipated levels of traffic (e.g. improved lighting and pedestrian facilities.)”
The statement added: “In the meantime, we once again acknowledge your frustration and thank you for your patience. Citizens are encouraged to read the Chief Executive’s Report on the Waterford City Centre Urban Renewal Scheme, which is available on our website. This summary document includes reference to traffic changes, our planning for same, as well as more specific answers to concerns raised during the public consultation process.”