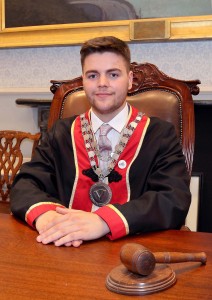 WATERFORD’S youngest ever Mayor has chastised his fellow Councillors for “grandstanding”.
Mayor of Waterford City & County Cllr Adam Wyse (FF) has warned his fellow Councillors about their behaviour inside the council chamber – and walked out of last week’s plenary meeting after calling a 10-minute adjournment.
At the December plenary meeting of Waterford City & County Council held in Dungarvan on Thursday last, Cllr Seamus O’Donnell (Ind) was expressing his dissatisfaction over an answer received from a council official in relation to controversial changes to Dungarvan’s Grattan Square.
Director of Services Fergus Galvin had told Cllr O’Donnell that the changes were working well and had resulted in the creation of “a calmer and more peaceful environment”.
This resulted in an outburst from Cllr O’Donnell who attempted to further question Mr Galvin.
“Councillor, excuse me I can’t allow you back in. I can’t allow you to ask this question,” said Mayor Wyse who was chairing the meeting.
As Cllr O’Donnell raised his voice and continued to speak over Mayor Wyse, he was warned that the meeting would be adjourned if he continued.
“I’ll adjourn for ten minutes if you don’t stop speaking” warned Mayor Wyse.
“You can adjourn it for good if you like,” replied Cllr O’Donnell.
Mayor Wyse then adjourned the meeting for ten minutes and left the council chamber.
He had earlier been involved in sharp exchanges with his own party colleague Cllr John O’Leary who had attempted to discuss an issue which he was told was an issue for his next district meeting.
“I’ve told you already, that’s a district issue,” said Mayor Wyse, who informed Cllr O’Leary that he wouldn’t get an answer to his question.
After returning from the adjournment, Mayor Wyse issued a stern warning to all Councillors.
“By now we know how this works. You know you can’t come in under a supplementary question,” he said.
He told Councillors it “doesn’t look good to the public” to see that the council has to do its business by adjourning meetings. “It’s not the way we should do our business,” he said.
“I’d appreciate if all of the Councillors showed some respect and we get on with business. You are in here to actually represent the people that elected you to represent them and I don’t think it’s right for anybody to be grandstanding.”
Later in the meeting, Cllr O’Donnell said he wished to apologise to the Mayor, the CEO and his fellow councillors for his “outburst”.
“I know you’re doing a good job” he told Mayor Wyse.
Earlier last week, during a reconvened statutory budgetary meeting, Mayor Wyse had also warned Councillors over their behaviour, saying he would not tolerate any shouting across the chamber.