Home » All Front Page News » Top Stories » Save the Hennebique!

Save the Hennebique Building: that’s the appeal which has been made to all 32 Waterford City & County Councillors in a submission to members, as well as the Council’s Planning Department by Waterford People Before Profit (PBP).
In a submission which runs to nearly 2,000 words, PBP acknowledges “the good work done in recent times (in the city) with the development of the Viking (Triangle), (the) Greenway and the public realm works in the city centre and clearly we have been learning from past mistakes and understanding our city was not carefully managed, but the demolition of the Hennbique building would represent one step forward two steps backward”.
Constructed in 1905 availing of methods developed in the late 19th Century by Frenchman Francois Hennebique, the mill is one of the oldest surviving steel-reinforced concrete structures in Ireland.
Today, it stands alone as it originally did, before warehousing was built on adjacent sites over the course of the past century, all of which were removed by the end of 2016. 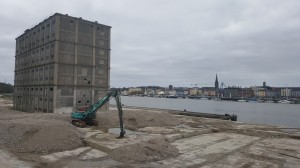 The Hennebique grain store building on the North Quay, the last physical reminder of the site's industrial past.

The PBP submission has asked all 32 Councillors to reject this Part 8 proposal to demolish the grain store, “the one area under planning regulations where councillors can vote directly to influence (such) a decision”.
Referring to the “municipal vandalism of our maritime heritage”, the submission notes the loss of the ‘Portlairge’ dredger, the “many historic London pontoons which graced our waterfront” and the loss and destruction of navigational equipment and literature through “ignorance and negligence”.
“Now, we propose to demolish the last remaining fingertip to our Maritime Industrial past still standing on the North Quays, the former R&H Halls Grain Store. This building is not just important for its industrial heritage but also for its Labour and Social history dimension. Some of the most beautiful, best built and largest vessels ever to enter our port and docklands graced its deep water berths. The beautiful and graceful lines of ships from maritime nations across the planet as well as vessels belonging to Irish Shipping Company, attracted shipping enthusiasts and photographers from all over the South East and beyond. Many local youths entranced by the graceful lines of these ships, the music of the block and tackle derricks and other deck handling gear, the exotic crews, the smells and sounds from this busy berth as well as the colourful characters who discharged the cargos, set their minds and determined on a career and life working at sea.”
Finding a suitable function for the building has proven “economically impossible” according to City & County Council Chief Executive Michael Walsh.
Speaking to The Munster Express in our April 6th edition, Mr Walsh said that this was partly responsible for the Council’s decision to commence the Part VIII (8) process which may well lead to the removal of the building.
“Our view has always been that the Hennebique (building) was unlikely to have a potential use. It’s very limited in terms of use – it’s only suitable for storage in reality – and given its close proximity to where the (proposed) pedestrian bridge and other amenities will land, the reality is that it doesn’t have a suitable use at that particular location,” he said.
Mr Walsh added: “It’s a very small (on a storey by storey basis) concrete frame building with an absolute maximum of about seven feet of head height (per floor) once you put services into it – and there are columns every three metres as well. So in general terms it would have been perfectly suitable for something like an archive, or for storage space or bulk storage – that’s what it was built for – but in the nature of mixed used development that we are now envisaging for the site, which is really modern, service and knowledge-based economic activity, it is impossible to reconfigure it in any way economically that could make it usable in this new context.”
On this front, the PBP submission contends: “A similar type grain store with low ceiling space has been successfully adapted on the South Quays and now houses the WIT architecture school and as stated earlier, previous plans for the Halls site included redesign and preservation.”
Submissions or observations with respect to the proposed development, can be made to the Council’s Planning Department up to 4pm on Thursday, January 18th.