Quarter of a million visitors to Greenway since opening

New survey reveals extent of amenity’s success
ALMOST a quarter of a million people have used the Waterford Greenway since its official opening last March.
Impressive findings from an extensive survey on the Waterford Greenway have revealed the huge success of the new amenity.
The results of the AECOM Waterford Greenway Intercept Survey, which features responses from 1,177 Greenway users who were interviewed at four specific points along the off-road trail in August and October, were presented at the December plenary meeting of Waterford City & County Council last week.
Well over nine out of 10 (94%) of visitors to the Greenway rated the amenity as either excellent or good.
The majority visiting from outside Waterford (80%) paid for accommodation while in Waterford and almost one in five visitors stayed four nights or more. 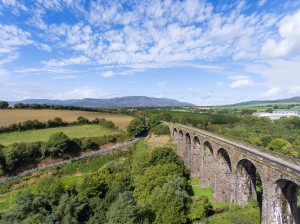 the Kilmacthomas viaduct which forms part of the Waterford Greenway

Dungarvan was the biggest draw with 45% of visitors choosing to stay in the West Waterford town as opposed to 22% in Waterford City and 29% elsewhere in the County.
Two thirds (or 66%) rated the conduct of other Greenway users as either excellent or good, with almost eight out of 10 rating safety on the trail as either excellent or good.
Asked what they like most about the Greenway, 70% of people liked the scenery and nature and 51% liked being away from traffic.
More than a third said the Greenway was peaceful and quiet.
Over one in five were most interested in features such as the Greenway’s tunnel and viaducts, while 18% said its outstanding feature was the friendliness of those using it.
Meanwhile, 41% of respondents could think of absolutely nothing which they disliked about the Greenway.
All survey respondents were asked about their spending habits while on the Greenway.
Of those who did spend, most were spending an average €28.50, further boosting the local and regional economy.
The study also found that the Greenway is used most by families and older people.
Of those using the Greenway, 53% said their purpose was walking or cycling trips for exercise while 36% said their key purpose was sightseeing or exploring.
91% of those surveyed said they planned a loop or return journey to the starting point of their cycling or walking trip. 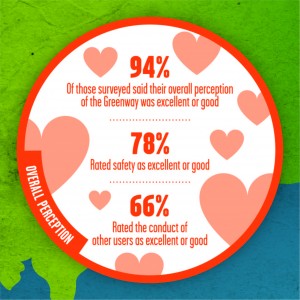 Data from sources including a number of different eco-counters which are located along the route has generated an estimate of almost a quarter of a million ‘unique’ visitor trips to the Waterford Greenway from the period of March to December.
The data estimates that there have been just over 105,000 pedestrian visits and 142,000 visits by cyclists.
Johnny Brunnock, Trails Officer with Waterford City & County Council, described these figures as “hugely strong”.
“The challenge is to continue to build on this success,” he said.
He said a new “Greenway Community” has evolved since it officially opened earlier this year.
“It’s extremely encouraging to see the Greenway being used for so many purposes by so many age groups right throughout the year,” he said.
“People take great pride in it and it has given communities all along the route a completely new lease of life – both in terms of the buzz and excitement that more visitors to the area is creating but also, many locals are getting active, getting out and meeting people along the way. It truly has been a win/win for Waterford and the entire region.” 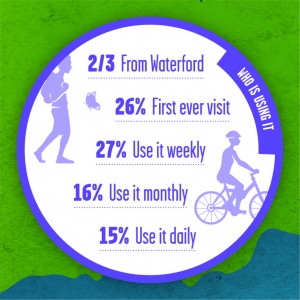 The results of the survey (which was conducted by Amárach Research) have been warmly welcomed by local Councillors.
Cllr Damien Geoghegan (FG) described the Greenway as a “remarkable success story” and the feedback from the survey as “absolutely fantastic”.
“People have taken to it literally and metaphorically,” he said.
Cllr John Hearne (SF) said the Greenway is the “jewel in the crown” of Waterford.
He said people who never before cycled are now regular Greenway users.
Cllr Hearne put forward a number of suggestions to further augment its success, including the development of camp sites, the construction of pontoons, and the possibility of developing walking trails and endurance sport events.
Cllr Jim Griffin (SF), who said he is a regular Greenway user himself, highlighted some safety issues.
He said emergency services would face difficulties in reaching remote locations of the Greenway during bad weather.
He suggested linking up with community first responders in certain areas along the Greenway such as Kilmacthomas and asked that his fellow Councillors approach such groups.
Cllr Griffin also spoke of the need for an all-terrain vehicle that would traverse the Greenway.
Cllr Joe Kelly (Ind) said that although most people surveyed were happy with the Greenway, 21 per cent expressed concerns over safety. 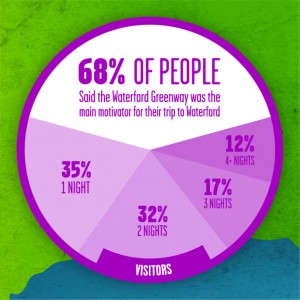 He suggested that this figure could be “delved into” in order to establish what the exact concerns are in order to “make the entire package even better”.
Cllr Cha O’Neill (Ind) highlighted the need for the Greenway extension from Bilberry into Rice Bridge and said he hopes to see progress in the New Year.
Cllr John Cummins (FG) welcomed the fact that 68 per cent of those from outside Waterford who used the Greenway said that the new amenity was their primary reason for visiting Waterford.
“That shows its worth,” he said.
“Without the Greenway those visitors wouldn’t be in Waterford.”
He noted that 40 per cent of visitors had stayed in hotels and wondered if a lack of bed capacity was preventing more people from staying in hotels during their time in Waterford.
“Anecdotal evidence suggests that there is a huge shortage of hotel beds in the City and Dungarvan,” he said.
Cllr Cummins said he hopes the data will show the private sector there is an “absolute need” for additional hotels.
While he said great progress has been made with the Greenway, he acknowledged that there is still a need for “honing the product”.
Cllr Sean Reinhardt (Ind) described the Greenway as a “vein which runs through Waterford” and highlighted the need to “exploit surrounding areas in a positive way”.
Cllr M J O’Ryan (FF) suggested that a conference on rural Ireland conference could be held to coincide with the first anniversary of the Greenway’s official opening in March.
Meanwhile, Cllr Breda Brennan (SF) highlighted the success of the nature walks which are regularly conducted by Munster Express wildlife columnist Albert Nolan at St John’s River, Kilbarry in association with the Friends of St John’s River voluntary group.
She suggested that similar wildlife walks could be held on the Waterford Greenway in order to promote the flora and fauna of the area.
CEO of Waterford City & County Council Michael Walsh said the survey results are very encouraging.
“Developing the Greenway was a significant but a very worthwhile investment that is having a major economic and social impact across our County, not just during the peak tourist months but right throughout the year,” he said.
“Waterford is the jewel in the crown along Ireland’s Ancient East and the Waterford Greenway has not just drawn visitors into our county but it has helped us all to take stock and appreciate the fantastic natural amenities we have on our doorstep. Again and again visitors I’ve met along the route comment on the friendliness of locals and the varied landscape that stretches from the City to the mountains and down to the sea. It’s breath-taking and we’re only delighted to showcase it to the world.”
Mayor of Waterford City & County Cllr. Pat Nugent, said: “It is heartening to see so many local people using our Greenway and particularly to note that 15% of respondents say they use it daily. It’s great to see walking, cycling, jogging and other clubs spring up and more people than ever are exercising on it, particularly families.”
He added: “It’s encouraging to see the Greenway being used by so many people of all ages throughout the week and at weekends. We look forward to its continued success and to welcoming even more visitors to Waterford City and County in 2018 and beyond.”