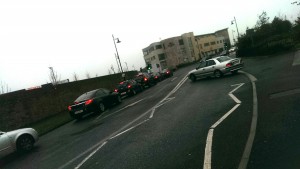 Daily traffic congestion since the opening of Ardscoil na Mara in Tramore is causing a nightmare for parents and creating a potentially deadly situation for children, Waterford’s Metropolitan District has been told.
At the November meeting, a number of concerns were raised about traffic bottlenecks being caused during rush-hour times because the new secondary school and the nearby shopping centre are accessed from the same roadway.
The issue was first raised by Jim Griffin (SF), who noted that John Deasy TD had already highlighted the situation, particularly the potential difficulties for emergency vehicle access.
Cllr Griffin said this ‘needs to be looked at’ as every councillor in Tramore had raised the situation since the school opened in September. Metropolitan Mayor Eamon Quinlan (FF) added that a satisfactory resolution was needed at the Tramore school.
Senior Engineer Niall O’Kane told the meeting that the feasibility of a roundabout at the school had been considered in the original drawings but this was not approved at the planning stages as it was considered unsafe for children crossing. Instead, the current traffic lights went in and these were working relatively well.
However Mr O’Kane acknowledged high traffic volumes on wet days were causing congestion.
He told the Councillors that a long-term solution such as a pedestrian crossing would require major investment and the Council could make a funding application for this in the future.
Cllr Griffin suggested requesting that Gardaí be asked to address the traffic outside the school on wet days, as children were being put in danger at the moment.
Meanwhile Fine Gael TD Deputy John Deasy has written to Tramore Gardaí regarding his concerns about the traffic congestion and parents parking on both sides of the public road outside the school.
In a letter to Superintendent John Mulligan, seen by this paper, Deputy Deasy said he was exploring whether or not additional funding could be raised through central government to enable the
Council to carry out works on the road. In the interim, he’s requested that the Gardaí to assess the situation.
Deputy Deasy said his office had been inundated with calls from concerned parents, many of whom believe a separate entrance at the Ard Scoil would significantly ease the congestion. Placing the traffic light at the Clarinwood roundabout meant children from that estate now have to cross two roads to get to school, Deputy Deasy noted.
He said parents had told him that many elderly people are terrified to go near the area during rush hour over the traffic chaos, with parents parking on the school grounds and on the public road adjacent to the school causing a serious backlog of cars and, creating between twenty and forty minutes wait time in cars.