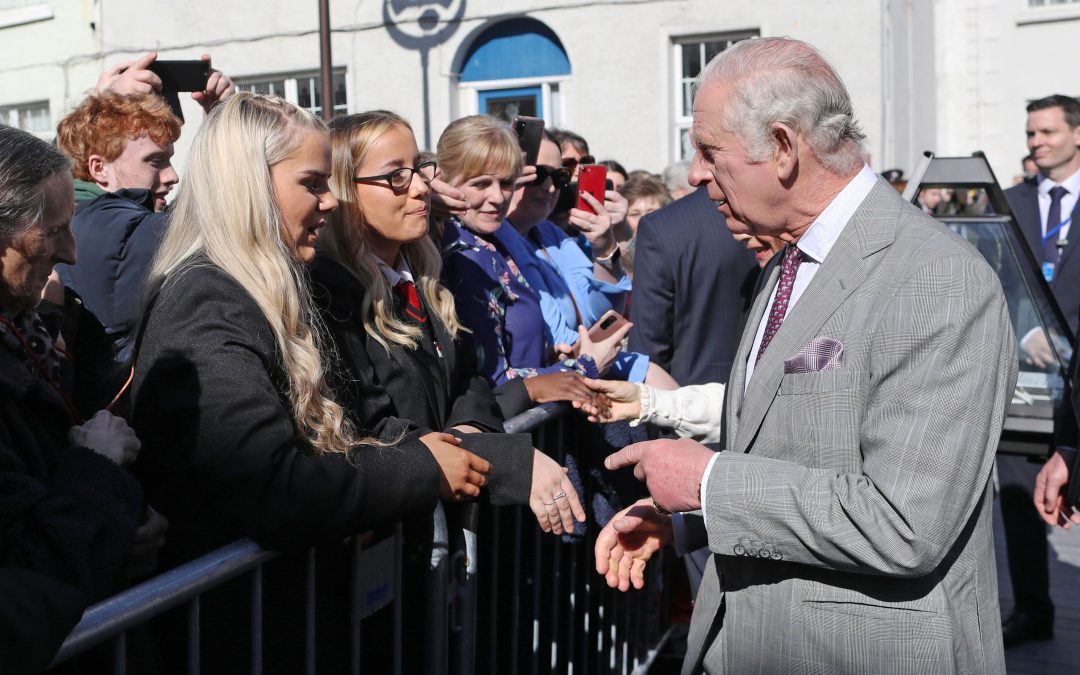 Blue skies and unseasonably warm temperatures heralded the arrival of The Prince of Wales and The Duchess of Cornwall to Waterford last Thursday when they were welcomed by locals who lined the streets.

As the city basked in glorious sunshine, the Royal couple took full advantage of the good weather, strolling through the Viking Triangle and greeting various community groups. Mayor of Waterford City and County, Cllr. Joe Kelly welcomed them to the Déise, proudly showing off Reginald’s Tower, Ireland’s oldest civic building.

Charles and Camilla were treated to a performance by Waterford’s Viking Re-enactment Group which was set against the backdrop of the Viking Longboat and, as they continued their walkabout, they paused at the world’s longest wooden sword sculpture at 23 metres, crafted by local wood sculptor, John Hayes.

Continuing their walkabout, The Prince of Wales and Duchess of Cornwall enjoyed a lively performance from Spraoi and were also treated to the musical talents of the Mount Sion Choir in Bailey’s New Street in the shadow of the 13th century Franciscan Friary. 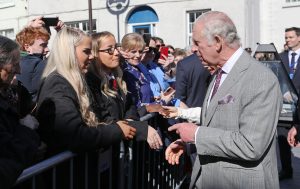 Princes Charles and Camilla also met with Emergency First Responders and frontline workers and spoke with them about their first-hand experiences of serving the people of Waterford during the COVID-19 pandemic.

Before learning of Waterford’s history at the Medieval Museum, Their Royal Highnesses heard from local people about how they are securing their future.  They met with members of ACT Waterford, an initiative which engages communities in creative solutions to climate change.

The couple then visited Waterford’s Medieval Museum.  There, they learned about Waterford’s rich history as Director of Waterford Treasures, Eamonn McEneaney showed them The Great Charter Roll of Waterford, made in Waterford in 1373. It is regarded as one of the great treasures of medieval Ireland because of the number and quality of the illustrations. 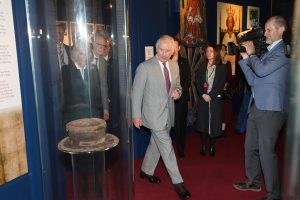 The Prince of Wales and The Duchess of Cornwall as they tour Waterford Treasures: Medieval Museum.  Photo: Julien Behal.

From there they carried on to the large room in City Hall for a mayoral reception which was attended by representatives from all aspects of the local community. One of the people who met Prince Charles during his city walkabout was a man who served with him in the Royal Navy. James Eccleston.

The Prince was talking to a group of sixth year students from the Presentation Secondary School, opposite the Irish Silver Museum when he spotted a badge on Mr. Eccleston’s blazer. It was an Air Handlers Association badge and it emerged that the two men had both served aboard the HMS Hermes in the mid 70’s although they hadn’t known each other.

The day was a whirlwind of non-step activity for the couple who briefly parted whilst Charles paid a visit to GIY on the Dunmore Road and Fitzgerald’s Farm in Kilmagemogue, Portlaw and Camilla visited the home of Cheltenham Gold Cup Winner, Henry de Bromhead’s yard in Knockeen. 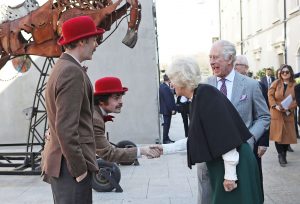 The Prince of Wales and The Duchess of Cornwall as they meet Spraoi performers in Waterford City. Photo: Julien Behal.