CONCERNS have been expressed over an “institutional bias against Waterford” following Fáilte Ireland’s launch of a new tourism initiative for the Midlands.
Last week, Fáilte Ireland announced its newest regional tourism proposition entitled ‘Ireland’s Hidden Heartlands’ which incorporates the Midlands and stretches from Limerick to the border with Northern Ireland.
The €2m initiative, which will place significant focus on the River Shannon, is designed to boost tourism across the Midlands region and follows on from the ‘Wild Atlantic Way’ and ‘Ireland’s Ancient East’ concepts. 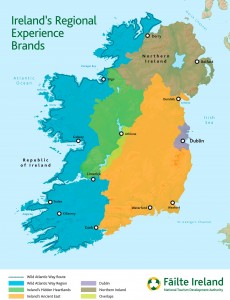 However, a local Councillor has raised concerns that the initiative will compete with ‘Ireland’s Ancient East’ and could risk diluting the brand’s effectiveness for areas such as Waterford.
“Waterford has hitched itself to ‘Ireland’s Ancient East’ at the urging of Fáilte Ireland,” said Cllr Quinlan.
“Advertising and resources have been diverted into trying to make it a success. Now we have a regional brand that will be seeking its slice of the governmental pie in terms of funding to our detriment.”
He believes Waterford has been “short changed” due to its omission from the ‘Wild Atlantic Way’ and points out that County Limerick can now lay claim to having areas in all three of Fáilte Ireland’s new tourism initiatives.
“Waterford was told it could not be a part of the ‘Wild Atlantic Way’ but Limerick gets to be in it, along with ‘Ireland’s Ancient East’ and now will also be in ‘Ireland’s Hidden Heartlands’, all three!” said Cllr Quinlan.
“Cork is in two and even Sligo can avail of two distinct tourism promotions. Businesses in Athlone and other areas along the Shannon can now pick and choose whether they would like to promote themselves through ‘Ireland’s Ancient East’ or ‘Ireland’s Hidden Heartlands’. Waterford is solely dependent upon one at this stage and having it undermined like this is deeply frustrating. Once again, clear institutional bias against Waterford’s favour is in the air.”
He added: “Many questions remain unanswered and assurances that Waterford’s funding streams in relation to tourism (a major local employer) will not be negatively impacted are a priority. As Ireland’s oldest city Waterford should be the jewel in the crown of the ‘Ireland’s Ancient East’ offering. Time will tell if ‘Ireland’s Hidden Heartlands’ will act as a bonus to the current regional brands.”
Fáilte Ireland’s Director of Commercial Development Paul Keely has described the latest proposition as having a ‘built in’ level of overlap between both tourism offerings in various locations.
He said the ‘Ireland’s Hidden Heartlands’ scheme has the potential to transform the local and regional tourist industry in the included counties, which is traditionally weaker than its coastal counterparts.
The ‘Wild Atlantic Way’, which stretches from Donegal to West Cork, has proved a huge success since its launch in 2014.
However, the entire South-East coast was omitted from the high profile initiative.
Attempts were made to have Waterford added to the tourism route but these were not successful.
‘Ireland’s Ancient East’ was unveiled the following year and places an emphasis on areas of the South-East such as Waterford’s Viking Triangle, Kilkenny’s Medieval Mile and Wexford’s Hook Peninsula.