The Tramore Enterprise Town exhibition, held on Friday last, proved to be a great success at the Tramore Racecourse.
Sponsored by Bank of Ireland, this was the event’s second staging, with Dragon’s Den star and event presenter Gavin Duffy noting the “great buzz” in the room ahead of an evening full of positive business stories. 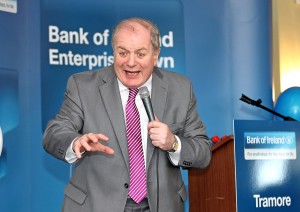 Tramore is certainly attracting more business start ups and there’s a wide array of new business in the town. This contrasts, Duffy noted, with the gloom that is frequently so pervasive in the national media.
The Dragon gave quite an entertaining speech in which he exhorted people to shop and trade local now that we are slowly recovering from “the mother of all recessions”. While noting that shopping online is growing when it comes to retail, “we should support local business where possible”.
Duffy advised business people to move away from the discount mentality to attract more business at the right price.
“Some businesses have become accustomed to too much discount – they need to move on from this now and make sure that they have a compelling offer to a customer,” he said.
He noted the success of the SuperValu proposition of shopping local and how people have become accustomed to purchasing good, quality food. He feels TV cookery programmes have also played a role in enhancing consumer knowledge, with healthy living becoming an increasing feature of traditional broadcast and print media coverage.
Bank of Ireland Enterprise Manager Julie Kennedy, said she was very pleased with the turnout and variety of stand holders, ranging from community groups, sports clubs to business such as SuperValu, along with small retailers, and service sector and restaurant businesses.
BOI will be holding 12 such events in Ireland this year and “this is one of the best,” she added.
Both she and Gavin noted the great community spirit in the room, extolling the virtues of enthusiasm and good networking. 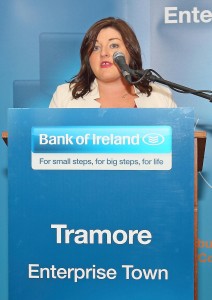 Event organiser, Jennifer Hickey from Bank of Ireland, Tramore welcoming everyone to the event on Friday last.

Tramore Tourism and Chamber were also happy with how the event , a special committee under local manager Jennifer hickey made a good effort in attracting stands and involving the community.
Tramore Musical Society, which recently staged ‘Rock of Ages’, performed a dance routine while Comhaltas also played a number of lively tunes.
Waterford hurlers Stephen O’Keeffe and Austin Gleeson, who played their part in the county’s National League semi-final win over Limerick, were also present to sign autographs.
After the Dragon opened proceedings, an entertaining discussion took place between former Munster and Ireland star Mick Galwey and BOI staffer and Munster Express GAA correspondent Brian Flannery.
This proved a light-hearted exchange as we heard some tales of the past with Munster, nights out in Paris after beating the French and how they prepared to beat the French on their soil against a cacophony of sound.
From Castleisland in Kerry, he told tales of his early rugby days, going to Shannon for training and moving from Gaelic Football to Rugby.
Other topics included the dark art of forward play before TV playbacks, fancy hairstyles of some players and headphones, which he feels ought to be banned in training and dressing rooms.
He was sorry to see the club game at both AIL and junior level falling back, and how Munster need to regain the hunger that took them to the top of European rugby, particularly pertinent in the wake of their latest Pro 12 defeat away to Connacht. 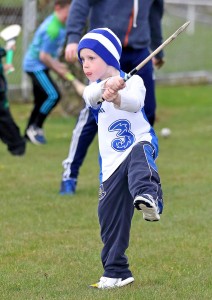 Young JJ Flanagan from Tramore taking his shot during the penalty competition at the Tramore Enterprise Town event at Tramore Racecourse held on Friday last.

]With a new Director of Rugby to be appointed this summer, ‘Gaillimh’ told ‘Flan’: “the spirit needs to improve.”
The final speaking event was hosted by yours truly as moderator, in which a good discussion about what it’s like to do business in Tramore was held with Jenny Pim of Pims Business Systems (and cake business, Jen’s Kitchen) and Barry Rogers of Chia Bia.
Both are happy trading here as Tramore is well connected to good transport networks, is a great place to live and has no commuter issues, although both must now source staff from outside the area due to their respective expansions.
We also met many stall holders running restaurants and service business and were all happy with the opportunity to network and meet people.
The Racecourse was deemed a good venue and Racecourse Manager Sue Phelan was delighted with how everything went.
Metropolitan Mayor Eamon Quinlan (FF) praised the event and the organisers, with new TD Mary Butler (FF) and City & County Councillor Jim Griffin (SF) also in attendance.
Property agents have spoken of the heightened demand for property in Tramore in recent months and again noted the stock shortage. 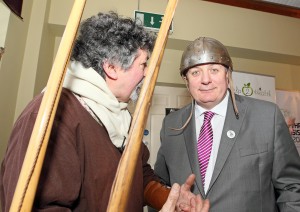 Sonya Walsh of Red Haus Interiors also seemed happy, as were Chia Bia, Irish Glass Jewellery and Crystal City creations, both by John Lynagh, garnering considerable attention.
Health was another area showcased at the event with acupuncturists Eva Heffernan and John Kelly also in attendance, as were Coderdojo Tramore, who presented a range of technological displays Cullencastle Grooming (for pets) plus Inistioge Puppy Rescue, were also represented. .
We also met with representatives of Tramore Rugby Club as well both soccer clubs, along with Tramore’s golf and GAA clubs. It all points to a positive drive forward by the town’s business community in the hope of securing better times ahead for all. 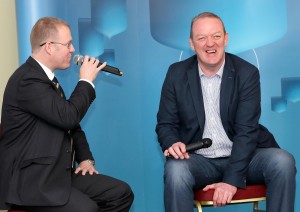 The organising committee of the Tramore Enterprise Town by Bank of Ireland at Tramore Racecourse are pictured with speakers Gavin Duffy and Mick Galwey, Mayor of Waterford Metropolitan District, Eamonn Quinlan and Mary Butler TD (both FF). 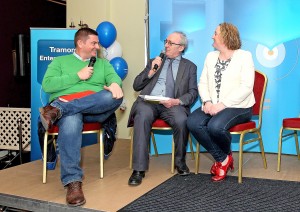