Kieran Foley reports
NO RESOLUTION has yet been found in the controversial feeder school issue involving Ardscoil na Mara in Tramore.
Fenor NS Principal Tim O’Byrne said no decisions had yet been made and expressed frustration at his attempts to deal with the Department of Education – especially since the election.
He said everything was “up in the air” and described the situation as very serious.
“Parents are irate and I don’t blame them,” he said.
Mr O’Byrne explained that parents of children who are currently in Fifth Class still don’t know if their child will be allocated a space at Ardscoil na Mara for their first year in secondary school.
He said such a situation was very unusual at this stage in the year, with the summer holidays fast approaching – a board of management meeting took place at Fenor NS last Thursday.
Parents have issued renewed calls for additional capacity to be provided at Ardscoil na Mara.
As previously reported in The Munster Express, they believe that extra space is required in order to cater for the large catchment area which the school serves. 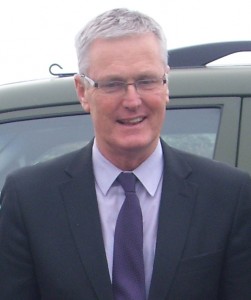 Around 200 concerned parents attended a meeting in Fenor in January over fears that students at the primary school would no longer be guaranteed a place at the nearby secondary school.
Parents of children in Dunhill NS have also expressed similar concerns.
“Families can’t be expected to deal with this uncertainty,” said Mr O’Byrne.
Last week, in a parliamentary question, Waterford TD John Deasy (FG) asked the Minister for Education and Skills about her discussions to date with Ardscoil na Mara and local feeder schools, including Fenor National School, regarding recent changes to the secondary school’s admissions policy.
He sought information on the proposals she has received with a view to expanding Ardscoil na Mara to cater for increasing demand from within the town and surrounding areas, and if she would make a statement on the matter.
In a written response, Minister O’Sullivan stated: “I wish to advise the Deputy that it is the responsibility of the managerial authorities of all schools to implement an enrolment policy in accordance with the Education Act, 1998. The enrolment policy must be non-discriminatory and must be applied fairly in respect of all applicants. My Department’s main responsibility is to ensure that schools in an area can, between them, cater for all pupils seeking school places in the area.”
She continued: “My Department has been in ongoing contact with the school, referred to by the Deputy, in relation to the pupil enrolment issues that have emerged in the school. The Department is aware of the position of the feeder schools, also referred to, and is taking account of this in its deliberations.
“There is a diverse range of issues involved however my Department is currently focusing with the school on the additional accommodation capacity required to provide for increasing pupil enrolments in its feeder area and the ways in which this might best be achieved.”
Deputy Deasy last week requested a meeting with a Department official/inspector and the principals of Árdscoil na Mara, Tramore and the feeder schools in the area.
Meanwhile, Metropolitan Mayor Eamon Quinlan has stated that he believes progress is being made on the issue.
“While it’s been frustrating lately to make progress on bigger issues with obvious government constraints, progress on the Fenor issue is being made,” he said.
Mayor Quinlan said he had received confirmation from Secretary General of the Department of Education that his requests for an urgent meeting with the principal officer have been accepted and a meeting will take place with the Fenor school principal shortly to bring Fenor students and families some comfort and clarity as they approach the end of term and continue to wonder about the admission policy for the Ardscoil.
“While we are not yet where we need to be on this important issue, the acceptance by the Department that the demand for admission on Ardscoil na Mara is greater than the school can accommodate and that this requires a solution is welcome,” he said.
“I fully understand and appreciate that Ardscoil na Mara’s is doing the best they can in difficult circumstances. The most important element for me is that no child is left behind and this includes both the Fenor and Tramore children in Fenor national school as well as in the schools in Tramore town. The department’s confirmation that a solution is being looked at and that Fenor will be central to that solution will come as a comfort to many.”